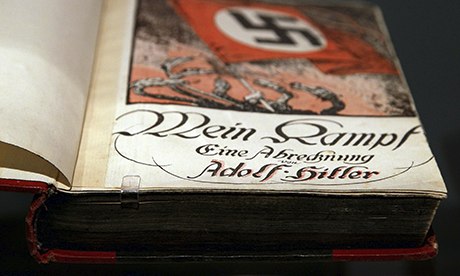 The CSU has had second thoughts about the Bavarian crest appearing in the academic edition of Mein Kampf, reportedly after complaints from Holocaust survivors. Photograph: Andreas Rentz/Getty Images

Last week, a number of news headlines suggested that the German state of Bavaria was trying to "ban" Adolf Hitler's Mein Kampf. In fact, no such thing had happened. What had taken place was that Bavaria's minister president, the Christian Social Union (CSU) politician Horst Seehofer, had gone back on a commitment to fund a critical, academic edition of the book, set to be published just before copyright runs out on 1 January 2016.

The finance ministry of Bavaria, where the publishing house behind Mein Kampf was officially registered when it was liquidated in 1945, has owned the copyright to the work since the end of the war, and has in the past denied any requests for publication.


In 2012, however, the Bavarian parliament had announced that it would help fund a critically annotated academic publication of the book produced by the Munich Institute for Contemporary History, the Institut für Zeitgeschichte, which has been worked on since 2009. A year ago, finance minister Markus Söder told the political magazine Cicero that "we want to make clear what rubbish is written in this book, and what fatal consequences it had", adding that "we have to demystify this book".


Now, after investing €500,000 in the project, the CSU seems to have had second thoughts about the Bavarian crest appearing in the academic edition, reportedly after complaints from Holocaust survivors.

This seemed politically inconsistent, but not quite the draconian measure it was made out to be. Perhaps, given Bavaria's status as the "birthplace" of national socialism, it was even the ethical thing to do. Most legal experts suggested that the publication of the academic edition would go ahead as planned, just with a bit less money.
More
Posted by Beattie's Book Blog at 9:05 am