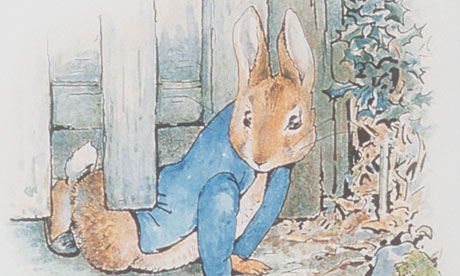 Proving the publishers wrong... An original illustration from The Tale of Peter Rabbit by Beatrix Potter. Photograph: Frederick Warne & Co/AP

So you think self-publishing is a 21st-century phenomenon? Think again. On December 16, 1901, a 35-year-old writer and illustrator printed 250 copies of her first book, featuring a naughty rabbit. Beatrix Potter decided to take control of her own future after getting fed up of receiving rejection letters from publishers for a story she had made up to entertain a sick child.

The Tale of Peter Rabbit was printed with 41 black and white woodblock engravings and a colour frontispiece, and proved so successful that, within a year, it had been picked up by one of the six publishers who had originally turned it down. By Christmas of 1902, Frederick Warne had sold 20,000 copies of the book, with Potter's own watercolour illustrations, at 1 shilling, and 1/6d for a luxury clothbound edition.

But Potter's self-publishing adventures didn't stop there. In 1903 she again took her career into her own hands after failing to reach agreement with Warne over her new story The Tailor of Gloucester.

Rare book dealer Christiaan Jonkers says: "She was very dogmatic about what she wanted it to look like and couldn't agree with Warne. Also he wanted cuts, so she published 500 copies privately. By the end of the year Warne had given in, cementing a relationship that would save the publishing house from bankruptcy, and revolutionise the way children's books were marketed and sold."

Potter, who was briefly engaged to one of the Warnes before his premature death, left the rights to her works to the publisher on her death. She thought up the tale of "four little rabbits whose names were Flopsy, Mopsy, Cottontail and Peter" in 1893, in a letter to Noel Moore, the sickly son of her old governess.
One of the few surviving copies of the original Peter Rabbit is on sale at Jonkers Rare Books, based in Henley-on-Thames, Oxford, with an asking price of £35,000.
Posted by Beattie's Book Blog at 6:33 am