The Greatness of Dads 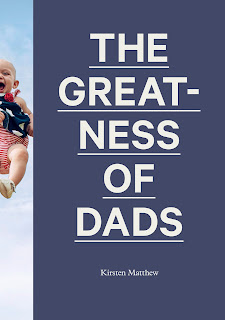 The Greatness of Dads, a compendium of tales about dads all over the world.


Featuring real and honest accounts from thirty-three children and adults, ranging in age from five to sixty-nine, in towns and cities across the globe, The Greatness of Dads gathers together the universal threads of fatherhood – love, responsibility, fun, embarrassment and heartbreak – in 288 heart-warming pages.

The book is written by New Zealand author Kirsten Matthew,  (right), and was borne out of a conversation with her friend Marc Ellis (a dad to two children).
‘Our vision was to create a big, beautiful book that is the antithesis of most cheesy celebrations of parenthood,’ says Matthew. ‘I hope that people will laugh and cry at the stories people have generously told about their fathers and that they will recognise in them the nuances of the relationships they have with their own dads.’

Celebrations, awkward moments, tricky conversations, fallings-out, marriages, births and deaths are all discussed in the interviews, completed by Matthew in the past year. They are accompanied by beautiful imagery, quotes about and from some of the best-known dads in history, as well as poems, letters, eulogies and illustrations about fatherhood.


‘My favourite interviews in the book are the ones that delve into really tough times and talk about the transformational power they had on their familial relationships. It taught me that everyone, no matter who they are or where they live, has an interesting tale to tell about the primary parental relationship in their lives,’ says Matthew.
‘And I love the stories about dads embarrassing their kids with their lack of coolness, too!’ she adds.


The Greatness of Dads features the following interviews with New Zealanders:


Teuila Blakely, actress
Blakely talks about growing up in a large, strict, religious family in the coastal New Zealand city of Tauranga, and about how her dad helped her survive the ups and downs of life as a teenage single mum.


Sam Mannering, food writer
Mannering shares memories of his dad building him hay-bale forts and taking him on adventures on the family farm, and poignantly describes the experience of coming out to his father as a gay man and his father’s unexpected response.


Marc Ellis, entrepreneur and former rugby player
Ellis talks about the pleasure of being able to repay his dad for all his love and support – and inspires laughter with tales of his dad’s terrible dress sense.


Winston Wolfe Bracewell
Bright, young five-year-old Winston explains his father’s inability to do work around the house and what gets him into trouble.


Felicity Letcher, company director
As her father battles a degenerative illness, Letcher describes the changes in their relationship and the things she’s learnt through her dad.


Geoff Blackwell, publisher
Blackwell’s father is also his hero. In the book, he tells his story of following his father’s footsteps into publishing and learning to parent by following his example.


Dave Read, retired
Read speaks about wanting to raise his children to be culturally aware human beings, and his pride at their professional successes.

Angela Morgan, event manager
The perks and drawbacks of being an only child are explored by Morgan, who also shares her father’s terrible aisle-side advice.


The Greatness of Dads will also be published in Australia this year and the US next year.
PQ Blackwell - NZrrp.$44.95. Hardback.
Posted by Beattie's Book Blog at 12:02 pm