In-depth research: the Life and Opinions of Samuel Marsden 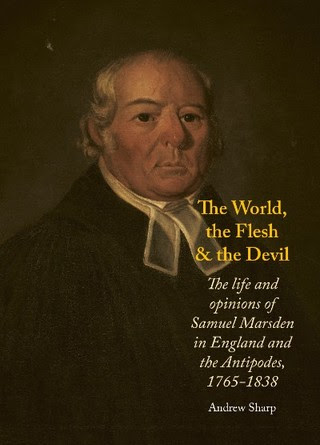 Although an evangelical missionary, his actual life in New South Wales was largely that of a farmer, and as a magistrate, where he got the reputation as a ‘flogging judge’. Professor Sharp thinks that this and other aspersions cast on his character are misleading. One needs to look at the short appendix at the end of the book to get the context for this, where the Australian historians are found to be the greater ‘calumniators’, whereas New Zealand writers are ‘dismissive’ due to their lack of interest.

If Sharp’s intention is to restore Rev. Marsden’s character or, at least, provide the context for the events, he has chosen a rather tortuous method. In fact, Marsden spent considerable time and effort in answering his contemporary critics, and the various calumnies cast against his character. There also seems to be a significant quantity of personal correspondence to draw on. So, having done the in-depth research into Marsden’s entire missionary career, Professor Sharp is determined to use all his material, and try to present it in Marsden’s own words to a large extent, including long quotations.

Despite being far too long, it is quite straightforward to point to the centre of the book: Marsden’s attitude to authority, based on personal morality. So while Marsden believed in authority structures, he expected the incumbents in positions of power to act as gentlemen, Christian gentlemen.

His first clash with authority figures came on the voyage out to ‘New Holland’ (Australia). Having condemned the ship’s captain for not observing the Sabbath and for his fornication with a female servant, Marsden finds himself having to deliver his first child on board without any assistance. Elizabeth, his long-suffering wife, survives this and other hardships – we gather this by way of asides in the text.

Most of the book is about the advancement of Marsden’s status in colonial society. His main conflict comes in the form of the New South Wales governor, Lachlan Macquarie, and his assistant named Campbell. Marsden and Macquarie inevitably clash over policy and practice, and rather than come to blows they take legal action. This is in a context of murder and mayhem amongst the convict settlers, and drunken debauchery amongst most of the others. Marsden takes particular exception to what was called the ‘Philo Free’ libel, a critique of the CMS missionary practice written by Campbell. This is a classic example of what Sharp calls the ‘politics of amour propre’ and it takes up the central part of the book. It also has a kernel of truth that reflects the missionary dilemma.

It turns out the missionary stations established in Tahiti and elsewhere, struggle to survive and make themselves relevant to the native populations, when not actually being physically threatened. To become relevant, involved trading with the natives; and the economic imperatives taking precedence over evangelical purpose was the basis of Campbell’s critique.

This was problematic before the New Zealand mission station was established by Marsden, and became worse in practice whenever he returned to Parramatta, leaving his men behind. Despite instruction otherwise, the missionaries ended up having to provide muskets and powder to local iwi for them to pursue their wars, and then put up with the results: slavery and cannibalism. Civilising the natives needed to precede any possible conversions to Christianity. But this would require more fraternisation and therefore fornication.

Sharp suggests that the chapters in the book can read as separate essays. Due to the overall length of the text this is essential, but the Philo Free libel comes up again and again. Sharp also has the habit of flagging an issue in an early chapter, and not fully explaining it to a later chapter, making continuity a problem.

The later chapters on the New Zealand mission in the Bay of Islands are important, and one can learn about our colonial history. But it takes too long to get there. While it is good that a university press is prepared to publish a major scholarly work like this, it needs some heavy editing unless the intended readers are to be restricted to those interested in missionary history and the particular controversies around Samuel Marsden: i.e. preaching to the converted.