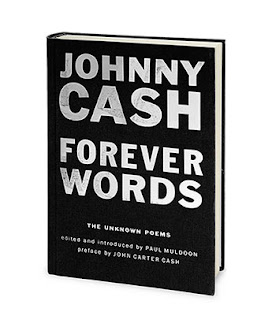 Newly discovered in the Cash family archives, a treasury of never-before-published poems and songs from the legendary Johnny Cash.

Since his first recordings in 1955, Johnny Cash has been an icon in the music world. In his newly discovered poems and song lyrics, we see the world through his eyes. The poetry reveals his depth of understanding, both of the world around him and within - his frailties and his strengths alike. He pens verses in his hallmark voice, reflecting upon love, pain, freedom, fame and mortality.

Illustrated with facsimile reproductions of Cash's own handwritten pages, Forever Words is a remarkable new addition to the canon of one of America's heroes. His music is a part of our collective history, but here he demonstrates the depth of his talent as a writer.

Edited and with an introduction by Paul Muldoon, as well as a preface by John Carter Cash, this is a book sure to delight and surprise fans the world over.

Johnny Cash (1932-2003) was an American icon and country music superstar. Cash first sang publicly while in the air force in the early fifties. Married to country legend June Carter, he became the youngest person ever to be chosen for the Country Music Hall of Fame, and was inducted into the Rock and Roll Hall of Fame in 1992, the Gospel Hall of Fame and is also a member of the Songwriter's Hall of Fame. Over the course of his career, he appeared in feature films, hosted his own television show, he won nineteen Grammy awards, four of them posthumously, and performed everywhere from the Folsom State Prison to the White House. John Carter Cash, having been involved in music all his life, is an accomplished and award-winning record producer. He is also a singer-songwriter and recording artist.
He is the only son of Johnny Cash and June Carter Cash. He is also the author of three children's books, a biography on his father, one on his mother's life and a fantasy novel, Lupus Rex. Paul Muldoon is the author of twelve collections of verse, including Moy Sand and Gravel, for which he won the 2003 Pulitzer Prize for Poetry. He is Howard Clark Professor at Princeton University and is a Fellow of the Royal Society for Literature and a Fellow of the American Academy of Arts and Letters.
Publisher:            Allen & Unwin - Canongate
Pub Date:            December 2016
Hardback:          $32.99