The Hobbit: An Unexpected Journey overcomes setbacks for premiere 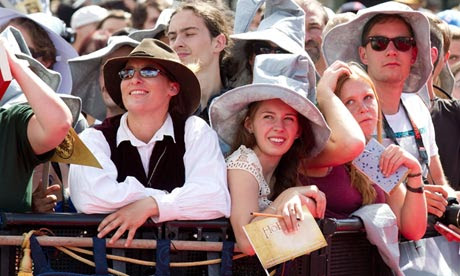 Fans wait for Peter Jackson and the cast to arrive ahead of the world premiere of The Hobbit: An Unexpected Journey in Wellington. Photograph: Marty Melville/AFP/Getty Images

They trooped to Wellington in their tens of thousands, from all over the globe, dressed as dwarves, goblins, hobbits, elves – and other, less easily identifiable Middle-earth creatures.
Almost a decade after Peter Jackson's The Lord of the Rings triptych of films set the global box office on fire to the tune of $2.9bn (£1.8bn), the director was back in New Zealand to premiere the first part of his wildly (in some quarters) anticipated adaptation of JRR Tolkien's The Hobbit.
There was scant wriggle-room on either side of the 500-metre-long red carpet snaking towards the Embassy theatre where the first part of a planned trilogy The Hobbit: An Unexpected Journey was screened for the first time to the public. An Air New Zealand plane decked out in Middle-earth livery flew low overhead, to roars of approval.
Cast members Martin Freeman (who plays hobbit Bilbo Baggins), Andy Serkis, Cate Blanchett, Sylvester McCoy, Barry Humphries and Elijah Wood were among those who had been jetted in for the event, with fans divided over which star they were keenest to glimpse. "I came here to see the stars but also Peter [Jackson]," said Samantha Cooper, a student. "I loved The Lord of the Rings and that made me want to be here. Without him none of it would be here."
Fellow New Zealander Sam Rashidmardani, 12, said he had come to see Britain's Serkis, who returns as Gollum. "It was amazing," he said of the event, adding his own impression of his hero's character: "My precious."
Serkis, who also acted as second unit director on the project, told reporters he had enjoyed getting back under Gollum's slimy skin after nearly a decade. "I was reminded on a daily basis he's truly never left me," he said.
The Hobbit is set 60 years before the events of the Lord of the Rings films and was originally intended as two movies. Tolkien published the novel – subtitled There and Back Again – in 1937, 18 years before his later, much longer work. However, Jackson said the new trilogy had benefited from arriving in prequel form. "I'm glad that we established the style and the look of Middle-earth by adapting The Lord of the Rings before we did The Hobbit," he said on the red carpet.
An Unexpected Journey, which is in 3D, is also being screened at selected cinemas at 48 frames per second, compared with the 24fps that has been the industry standard since the 1920s.
Jackson admitted that only about 1,000 of the 25,000 theatres that will show the film worldwide are equipped to show the higher rate format, but said he hoped people would make the effort where possible
Full story at The Guardian
Posted by Beattie's Book Blog at 6:23 am