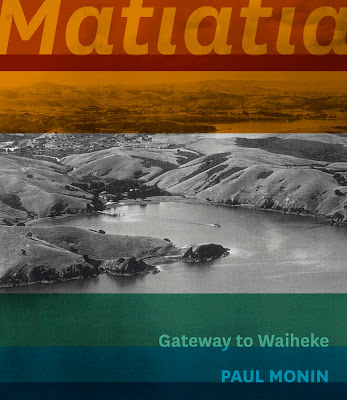 Matiatia Bay is the gateway to Waiheke Island. For centuries it has been the landing place for travellers in the Hauraki Gulf – from waka to yachts, excursion steamers and commuter ferries.
This small bay, Waiheke’s best natural harbour, is now at the most important turning point in its modern history. The increasing density of traffic in the gulf as well as the continued growth in Waiheke’s popularity mean that Matiatia is becoming uncomfortably congested. The pressure for development is real, yet the bay’s historical significance must be respected. Waiheke residents, urban planners, the Auckland Council, shipping operators and other local industry all have a keen interest in what happens next at Matiatia.
Understanding the past is crucial to the decisions being made today. Waiheke historian Paul Monin tells the story of Matiatia from occupation at the time of the first Maori settlement of Aotearoa to the present day.
Here in a fertile bay in the magnificent setting of the Hauraki Gulf is a microcosm of New Zealand’s history. Charmingly written, Matiatia: Gateway to Waiheke explores the area’s archaeology, politics, ecology and society, illustrated with a rich selection of photographs and maps.
The book is most  timely with summer coming and the huge influx of visitors to Waiheke and also because it's good historical research, leading up to the current situation. The recent shelving of current redevelopment plans as well as the talk of a marina either at Matiatia or another of the bays will soon be back on the table for decisions to be made. The ferry crossings are becoming bottle-neck with the number of visitors and locals now using the ferries so regularly - 18 hours a day, 7 days a week all creating significant congestion.
About the author
Paul Monin’s history of the Hauraki Gulf area, Hauraki Contested (2001) won the J. M. Sherrard Major Award in New Zealand Regional and Local History in 2004. He has published articles in the New Zealand Journal of History and the Journal of New Zealand Literature, and contributed to the New Oxford History of New Zealand (Oxford University Press, 2009) and to Te Ara, The Encyclopaedia of New Zealand, in 2010.
Bridget Williams Books - RRP $34.99 •  144 pages - 50 b/w illustrations

Posted by Beattie's Book Blog at 7:10 am