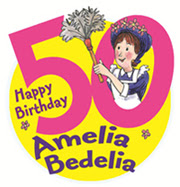 It’s been a half-century since Amelia Bedelia first bumbled into the Rogers’ household and dusted the furniture with dusting powder, put the lights out on the clothesline, and dressed the chicken in overalls. Published by Harper & Row in September 1963, Peggy Parish’s Amelia Bedelia, illustrated by Fritz Siebel, was the first in a series of picture books and I Can Read! titles that have entertained multiple generations of children and sold more than 35 million copies in the U.S. alone. In January, Greenwillow launches its celebration of the literal-minded housekeeper’s golden anniversary with four Amelia Bedelia releases.

The new books include Amelia Bedelia: Fiftieth Anniversary Edition, a facsimile of the 1963 volume, which has an announced first printing of 100,000 copies. The picture book features Siebel’s original four-color jacket art and green-and-black interior illustrations. Back matter reproduces archival photos; spreads from Siebel’s dummy, with handwritten editorial notes from the book’s editor, Susan Hirschman; and pages from the Harper & Row catalogue announcing the book. Also due is a new edition of the I Can Read! version of that first book, featuring a foil cover; and the two inaugural Amelia Bedelia Chapter Books: Amelia Bedelia Means Business and Amelia Bedelia Unleashed, written by Herman Parish (Peggy’s nephew) and illustrated by Lynne Avril. 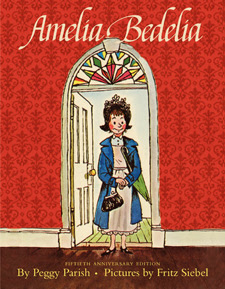 The 50th anniversary facsimile edition of the original Amelia Bedelia.

A third-grade teacher at Manhattan’s Dalton School, Peggy Parish had earlier written several books for children, including Let’s Be Indians, which Harper & Row published in 1962. Amelia Bedelia grew out of conversations the author had with Hirschman, during which Parish shared anecdotes about her students and their sometimes hilarious vocabulary mix-ups. “Susan knew that Peggy had an absolutely wonderful sense of humor, and the two of them came up with a fabulous book idea, inspired by things these third graders were saying in the classroom –– and Amelia Bedelia was born,” says Virginia Duncan, v-p and publisher of Greenwillow Books, which Hirschman started in 1974.
Duncan, who has edited the Amelia Bedelia books since she arrived at Greenwillow in 1997, points to the books’ unfailing humor when asked about their enduring appeal. “The way that Amelia Bedelia always does exactly what she’s told, literally, is very funny,” she says. “And the other thing I love about her is that she is so positive. She has this can-do approach to whatever situation she finds herself in, which is very appealing. She barges in, handles things, and everything works out. Amelia Bedelia just loves life. She never grows old.”