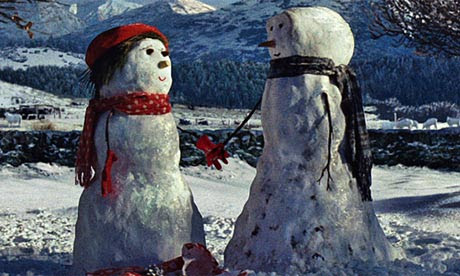 A loving snowman, concerned his beloved snowlady might be feeling the winter chill, is daunted by nothing in his quest to find her a scarf, hat and gloves. We have all – well, more than two million of us, anyway – seen John Lewis's latest Christmas ad, and now we can read the children's book as well.
Independent publisher Nosy Crow pulled out all the stops to create a children's book based on the story – snowman is made, snowman realises lady love is cold, snowman crosses hill and dale to make sure she's wrapped up warm – in the days after the ad was first aired on 9 November. Told using images from the advert and a story in verse written by the publisher's managing director Kate Wilson, The Snowman's Journey will hit John Lewis stores on Saturday.

Wilson decided to do the book the day after the ad was released. "We created a dummy version literally over the weekend, and John Lewis went for it straight away," she said. "Obviously there are people who don't respond to the ad, but it was really remarkable to me to see how many people chose to go to YouTube to look at it again. Lots of people have really responded to the story – I think John Lewis is genius at creating these narrative advertisements. This one had a real adventure, lots of different scenes, and a protagonist in the form of a snowman, which as we all know from Raymond Briggs is a very powerful, child-centred sort of character."

The story opens: "Once upon a Christmas time / two children woke up with a plan – / they'd use the sparkling snow / to build a snow girl and snowman. // The children worked hard all day long / Until their mother called them home. / The winter day grew colder still. / The snowpeople were left alone."
Wilson did not seem perturbed by what some are likely to see as a nakedly commercial cash-in. "The thing about the ads is they are very narrative-driven. John Lewis never appears in the ad – you never see the snowman go into John Lewis and buy a scarf so I felt it had a generalness," said Wilson. "I didn't feel like I was having to crowbar in references to specific retailers. I did think very hard about that, and I felt that one of the things I rather liked was that he doesn't buy her a Rolex watch, he buys her a scarf, hat and gloves, which is perfect for a snowperson. It's quite modest, and I felt that was OK. I didn't want anything which would give a spend, spend, spend message, and this had a message I didn't feel uncomfortable with putting into a book."
Posted by Beattie's Book Blog at 5:56 am