The year’s notable fiction, poetry and non-fiction, selected by the editors of The New York Times Book Review. 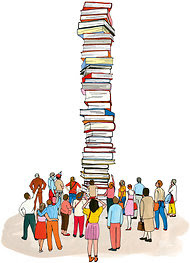 ALIF THE UNSEEN. By G. Willow Wilson. (Grove, $25.) A young hacker on the run in the Mideast is the protagonist of this imaginative first novel.
ALMOST NEVER. By Daniel Sada. Translated by Katherine Silver. (Graywolf, paper, $16.) In this glorious satire of machismo, a Mexican agronomist simultaneously pursues a prostitute and an upright woman.
AN AMERICAN SPY. By Olen Steinhauer. (Minotaur, $25.99.) In a novel vividly evoking the multilayered world of espionage, Steinhauer’s hero fights back when his C.I.A. unit is nearly destroyed.
ARCADIA. By Lauren Groff. (Voice/Hyperion, $25.99.) Groff’s lush and visual second novel begins at a rural commune, and links that utopian past to a dystopian, post-global-warming future.
AT LAST. By Edward St. Aubyn. (Farrar, Straus & Giroux, $25.) The final and most meditative of St. Aubyn’s brilliant Patrick Melrose novels is full of precise observations and glistening turns of phrase.
BEAUTIFUL RUINS. By Jess Walter. (Harper/HarperCollins, $25.99.) Walter’s witty sixth novel, set largely in Hollywood, reveals an American landscape of vice, addiction, loss and disappointed hopes.
BILLY LYNN’S LONG HALFTIME WALK. By Ben Fountain. (Ecco/HarperCollins, $25.99.) The survivors of a fierce firefight in Iraq are whisked stateside for a brief victory tour in this satirical novel.
BLASPHEMY. By Sherman Alexie. (Grove, $27.) The best stories in Alexie’s collection of new and selected works are moving and funny, bringing together the embittered critic and the yearning dreamer.
THE BOOK OF MISCHIEF: New and Selected Stories. By Steve Stern. (Graywolf, $26.) Jewish immigrant lives observed with effusive nostalgia.
BRING UP THE BODIES. By Hilary Mantel. (Macrae/Holt, $28.) Mantel’s sequel to “Wolf Hall” traces the fall of Anne Boleyn, and makes the familiar story fascinating and suspenseful again.
BUILDING STORIES. By Chris Ware. (Pantheon, $50.) A big, sturdy box containing hard-bound volumes, pamphlets and a tabloid houses Ware’s demanding, melancholy and magnificent graphic novel about the inhabitants of a Chicago building.
BY BLOOD. By Ellen Ullman. (Farrar, Straus & Giroux, $27.) This smart, slippery novel is a narrative striptease, as a professor listens in on the sessions between the therapist next door and her patients.
CANADA. By Richard Ford. (Ecco/Har­perCollins, $27.99.) A boy whose parents rob a bank in Montana in 1960 takes refuge across the border in this mesmerizing novel, driven by fully realized characters and an accomplished prose style.

The whole list at The New York Times.
Posted by Beattie's Book Blog at 8:14 pm