Kicking the Tyres: A new book about 2011’s general election 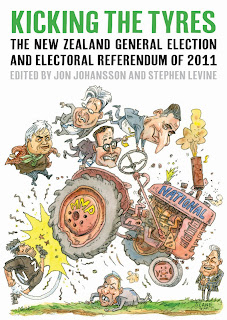 A new book and DVD about 2011’s general election has been published by the Victoria University Press.

Kicking the Tyres: The New Zealand General Election and Electoral Referendum of 2011 was edited by Professor Stephen Levine and Dr Jon Johansson, from Victoria University’s School of History, Philosophy, Political Science and Interna tional Relations.
It tells the story of the 2011 election campaign and of the National Party's success in winning more votes and seats than any other party. 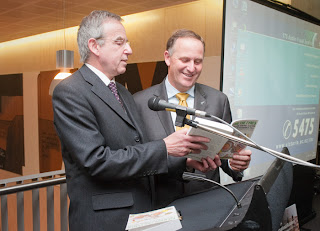 The new book was launched by Prime Minister the Right Honourable John Key at Victoria University’s annual New Zealand Political Studies Association conference, which brings together political scientists and graduate students from around New Zealand and overseas to look at topics including New Zealand politics, electoral systems, international relations and public policy.
Kicking the Tyres features chapters from representatives of all the parliamentary parties, and includes a section dealing with the 2011 electoral system referendum. It is accompanied by a DVD featuring materials such as election photographs; leaders' debates; political party and electoral commission TV ads.
Victoria University has been producing books about NZ’s general elections since 1987, and this is the ninth book in the series. The previous book was titled Key to Victory, and launched by the Prime Minister in early 2010.
Kicking the Tyres will be available in bookshops in early December.
Posted by Beattie's Book Blog at 1:30 pm