A Tight Grip Can Choke Creativity

Further to my piece earlier on Permissions freom the Literary Review here is a piece from the New York Times last weekend that has been brought to my notice by Fergus Barrowman of VUP.
On Friday, a lawyer named Anthony Falzone filed his side’s first big brief in the case of Warner Bros. Entertainment and J. K. Rowling v. RDR Books. Mr. Falzone is employed by Stanford Law School, where he heads up the Fair Use Project, which was founded several years ago by Lawrence Lessig, perhaps the law school’s best-known professor. Mr. Falzone and the other lawyers at the Fair Use Project are siding with the defendant, RDR Books, a small book publisher based in Muskegon, Mich. As you can see from the titans who have brought the suit, RDR Books needs all the legal firepower it can muster. 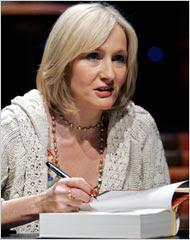 Pic of JK Rowling, Ric Francis/Associated Press
The author J. K. Rowling is suing to stop publication of a Harry Potter companion book.
As you can probably also see, the case revolves around Harry Potter. J. K. Rowling, of course, is the creator of the Harry Potter series — “one of the most successful writers the world has ever known,” crowed Neil Blair of the Christopher Little Literary Agency, which represents her. Warner Brothers holds the license to the Harry Potter movies. Of the two plaintiffs, though, Ms. Rowling appears to be the one driving the litigation.
“I feel as though my name and my works have been hijacked, against my wishes, for the personal gain and profit of others and diverted from the charities I intended to benefit,” she said in a declaration to the court.
And what perfidious act of “hijacking” has RDR Books committed? It planned to publish a book by Steven Vander Ark, who maintains a fansite called the Harry Potter Lexicon. The Lexicon publishes Harry Potter essays, finds Harry Potter mistakes, explains Harry Potter terminology, devises Harry Potter timelines and does a thousand other things aimed at people who can’t get enough Harry Potter. It’s a Harry Potter encyclopedia for obsessive fans.
So long as the Lexicon was a free Web site, Ms. Rowling looked kindly upon it. But when Mr. Vander Ark tried to publish part of the Lexicon in book form — and (shudder!) to make a profit — Ms. Rowling put her foot down. She claims that she wants to publish her own encyclopedia someday and donate the proceeds to charity — and a competing book by Mr. Vander Ark would hurt the prospects for her own work.
But more than that, she is essentially claiming that the decision to publish — or even to allow — a Harry Potter encyclopedia is hers alone, since after all, the characters in her books came out of her head. They are her intellectual property. And in her view, no one else can use them without her permission.
Read the rest............
Posted by Beattie's Book Blog at 2:11 pm