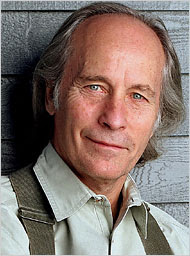 
In a surprise move, Richard Ford, the Pulitzer Prize-winning author of “Independence Day” and “The Lay of the Land,” has switched publishers for his next three books.

Mr. Ford, who turns 64 on Saturday, sold the United States rights to two novels and a short-story collection to Ecco, an imprint of HarperCollins Publishers, ending his 17-year relationship with Alfred A. Knopf and more than two decades of working with Gary Fisketjon, now a prominent editor at Knopf. At Ecco Mr. Ford will work with the publisher, Daniel Halpern.
In an announcement on Tuesday, Ecco described the deal as “major,” but in an interview Mr. Halpern declined to disclose the terms.

Reached by telephone, Mr. Ford deferred to Mr. Halpern and Paul Bogaards, a Knopf spokesman, for questions on why he made the move. Amanda Urban, Mr. Ford’s literary agent, said, “It was a long and fruitful relationship with Knopf, and regrettably we couldn’t come to terms.”
Mr. Ford published four books with Knopf, including the Pulitzer-winning “Independence Day.” Vintage, a paperback imprint now part of Knopf, a division of Random House, published “The Sportswriter” as an original paperback in 1986.
This is not Mr. Ford’s first time being published by HarperCollins; his first book, “A Piece of My Heart,” was published by Harper & Row in 1976. Jane Friedman, chief executive of HarperCollins, also worked with Mr. Ford when she was executive vice president of Knopf in the mid-1990s.
His first novel with Ecco, scheduled for a 2010 release, is tentatively titled “Canada,” and will be a “novel of revenge and violent retribution set on the Saskatchewan prairie, in the early 1960s,” according to Ecco’s statement.
Mr. Halpern added that the book would cover some new territory for Mr. Ford. “It’s an adventure story and it’s about a boy’s coming of age,” said Mr. Halpern, who saw just a brief summary before signing the deal.
Mr. Ford said he was writing the novel as well as working on the story collection. He said he had a story about New Orleans after Katrina that had been accepted for publication in The New Yorker magazine.
Mr. Halpern has been friends with Mr. Ford since meeting him at the Bread Loaf Writers’ Conference in Vermont in the early 1970s. “If somebody gave me a choice of adding somebody here, Richard would have been on my wish list,” said Mr. Halpern, who publishes novelists like Joyce Carol Oates, Dave Eggers and Tom Robbins. “I think he’s an amazing writer. He writes prose like a poet writes lines.”

Though critically praised, Mr. Ford’s most recent book, “The Lay of the Land,” published in 2006, was not a big seller. The book, the third in a trilogy — after “The Sportswriter” and “Independence Day” — about Frank Bascombe, a novelist and journalist turned real-estate agent, sold 51,000 copies in hardcover, according to Nielsen BookScan, which tracks about 70 percent of retail sales. In paperback, BookScan reported 36,000 copies sold.
“Our publishing association with Richard Ford has been a great one,” Mr. Bogaards of Knopf said. “It’s been long and fruitful and I know his decision to leave was not an easy one for him to make. I’m sure he considered his offers carefully and in the end made what he felt was the best choice for him.”
Mr. Fisketjon, 53, who published Mr. Ford at Vintage and Atlantic Monthly Press before moving to Knopf and bringing Mr. Ford with him, did not return a call seeking comment.