Books with everything
Blame it on the coffee, but I have a vision: books in every shop in every town
John Freeman (left) - Guardian blogger

There's a café in Barcelona where Borges-lovers should wind up in the afterlife. The walls are covered in books - hundreds of novels, volumes of poetry, biographies. Customers are invited to read while they sip, and if you become a regular, the barista will act like a human bookmark, logging your progress on whatever you read on a notepad behind the counter.
This cafe was on my mind last time I left London. Stuck at Heathrow, I decided to track down a copy of AL Kennedy's Day, which had just won the Costa Book Prize. It wasn't anywhere in sight at the bookstore, so I swung by the Costa coffee stand. Not only did they not even stock the book, the clerk seemed completely baffled as to what Costa had to do with books.
Half of us don't read books - period. Still, this was still disappointing. If a coffee chain is ready to sponsor a book award, and cash in on the publicity, why don't they stock the book? It would look good on the shelves next to the French presses and the Fairtrade Colombian. Costa could give a few to its employees as a bonus (though with over 600 outlets, that would be a lot of books).
This marriage of caffeine and the word has worked elsewhere - to a degree. Starbucks, which serves over 40m customers a week, began selling books in the fall of 2006. They kicked things off with Mitch Albom's treacly For One More Day. (We should be careful what we wish for.) They subsequently redeemed themselves, though: Ishmael Beah's A Long Way Gone went on sale in the UK in May last year. 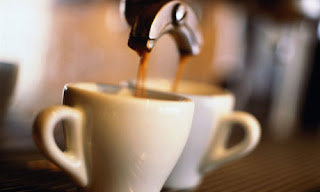 I hope Starbucks' program continues, but it would be nice if they expanded it to include several books at once - something off the beaten path, even. The men's retailer Paul Smith carries things like the Oxford series of Short Introductions and Penguin's Great Ideas series. Urban Outfitters sells novels by hip younger novelists. Ever since I found the mass-market paperback of a novel by William T Vollmann at a small drugstore in Paris, I thought: retailers can do better.
Coffee shops seem the ideal place to start. Half the people who go to a coffee shop are there to chat. The other half go to read. Why can't Starbucks or Costa give the readers more? They should start keeping tabs on centennials (William Saroyan is this year, Stephen Spender next), the many themed months (Black History Month is an obvious example), and even the less celebrated anniversaries - did you know Our Man in Havana is 50 this year? They should stock novels by authors who live nearby - or, better yet, get their employees to choose. After all, the only thing more depressing than no books is seeing the same books everywhere. When I first moved to New York 11 years ago, there was a coffee shop on Avenue A and 3rd Street called Limbo. The best thing wasn't their coffee (which was actually quite good), but their taste in books.
At night the laptop mafia left for the day to make way for the night's readings, which were curated by someone with an eye for young writers. In just under a year there I got my first taste of Colm Toibin, Jonathan Lethem and Thom Jones. The place has long since shut its doors, like Save the Robots and much else that was good about the neighbourhood. But I still have the stash of books I bought at the dozens of readings I attended. Unlike the coffee most places sell these days, none of it has gone anywhere near stale.
Coffee pic - Ian Logan. Great shot Ian.
Posted by Beattie's Book Blog at 8:06 am

If I could find a cafe here with a good selection of books to read you wouldn't get me out of the place. Excellent idea