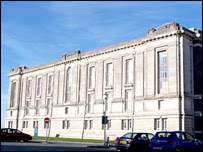 The National Library of Wales (left) is creating an online archive
Scores of writers are refusing to let their works be scanned for an online archive at the National Library of Wales because they are not being paid.
A year after a near-£1m project was awarded to digitise modern Welsh writing, a dispute between authors and the library has not been resolved.
The library is putting some 3.5m words from 20th Century English and Welsh periodicals and magazines on the web.
But literature promotion agency Academi wants writers to be paid a share.

Academi chief executive Peter Finch said: "It's an extremely exciting programme: what's wrong with it is there is no small sliver in there for paying the writers.
The big issue that is going to face writers everywhere is that certain corporations want to digitise works that are in copyright without paying the authors. 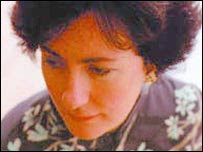 Former national poet Gwyneth Lewis (right) said
"Everybody else in the whole process is getting paid but the writers don't. "We know that in the arts sector, Lottery money is shrinking down to go to the Olympics. A lot of people will be without money."

The library aims to gain permission to digitise the contents of 90 journals, published since 1900, from the publishers. Some 600,000 pages of Welsh literary works, including poetry, translations and reviews, will be put online.
The library has said an offer to take down from its live site material by writers who object is a "reasonable compromise".
Wales' former national poet, Gwyneth Lewis said the issue was a matter of principle.
She said: "This is the thin end of the wedge. The big issue that is going to face writers everywhere is that certain corporations want to digitise works that are in copyright without paying the authors.
"If a writer's work is going to be put on a different platform, rights need to be negotiated with the writer for that extension, and that hasn't happened, therefore they can't have the work."
The National Library of Wales's generous offer to digitalise a selection of Welsh periodicals is a substantial boost to our cultural heritage .

However, some writers are happy for their works to be digitised without a payment.
Writer and publisher Lewis Davies, whose 1993 book Work, Sex and Rugby was voted the best book to describe Wales in the World Book Day campaign in 2003, is in favour.
In a comment on Academi's website, he said: "I feel that the National Library of Wales's generous offer to digitalise a selection of Welsh periodicals is a substantial boost to our cultural heritage and they should be congratulated for securing funding in a competitive world for this project.
"As a writer I've already been paid for my work published in the magazines which are due to be digitalised and the fact that the work which would otherwise be largely lost, unread and scattered is now to be universally available at the National Library of Wales is a significant extra payment in itself."

In an open letter to Academi, national library librarian Andrew Green said: "Since the scope of the project runs back to 1900, much of this research is essentially a historical exercise; the majority of authors involved are dead.
"Our experience has been that 99% of copyright holders are happy to grant consent; the proportion of copyright holders who have not been contacted and would refuse is therefore very small."
The library has been asked to comment.
A spokesman for the Welsh Assembly Government said: "We understand that the National Library of Wales and Academi have been in discussion on this matter and that these discussions continue."