Candidate Clinton Scrutinized by Women
By Michiko Kakutani writing in The New York Times, January 15, 2008
For the last week reporters, pundits, bloggers and political operatives have turned all their forensic powers on Hillary Rodham Clinton’s so-called crying moment — the moment in a New Hampshire cafe when her eyes welled with tears in response to some innocuous personal questions from an audience member: “How do you do it?,” “How do you keep upbeat and so wonderful?” That moment is credited with helping Mrs. Clinton stage a remarkable comeback in the New Hampshire primary, with galvanizing the sympathy of female voters and with revealing the candidate’s human side. 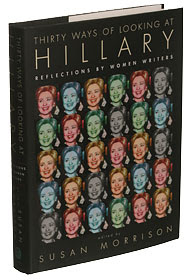 The 24/7 replaying of that moment on cable television also reminds us how relentlessly Mrs. Clinton has been dissected, deconstructed and decoded over the years: by now her marriage, her hair, her pantsuits, her voice and her laugh have been more minutely anatomized than her voting record on Iraq, her (mis-)handling of health care during her husband’s administration or her stands on Iran, Social Security and immigration.
This willful focus on the personal is underscored by “Thirty Ways of Looking at Hillary,” an intriguing but highly uneven anthology of reflections about Mrs. Clinton by a spectrum of well-known female writers.
Few of these contributors address Mrs. Clinton’s record as a senator (why did she vote last year to urge the Bush administration to label Iran’s Revolutionary Guard a terrorist organization?), practical electoral matters (just how electable is she?) or questions about her managerial style (how would the controlling, poll-driven instincts of her campaign team inform her approach to running the White House?). Instead, like voters and commentators obsessed with the “likability” factor, these writers zero in on vague feelings about Hillary’s karma, her self-presentation or her femininity.
Some of them seem to have wanted to identify with Hillary — or wanted her to embody their own ideals, career paths and views about feminism — and when she’s failed to ratify their own inclinations, they’ve turned on her with the fury of scorned sisterhood. Others point to a double standard in judging female candidates, even as they parse her every move and utterance, seeing in her a fun-house-mirror version of themselves.
Read the rest of the review.......
Posted by Beattie's Book Blog at 7:02 am