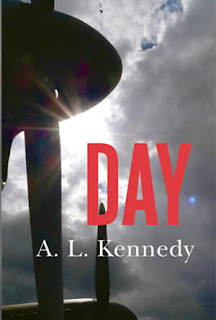 Story from The Times:

Author A.L. Kennedy has been picked as the odds-on favourite by bookmakers today to win this year's Costa Book of the Year award.
The latest odds released by William Hill have put Kennedy at 2-1 with her fifth novel Day, a bold story of a former RAF prisoner-of-war returning to Germany to play the part of a British prisoner of war in a film.
The second place favourite is the historian and biographer Simon Sebag Montefiore, with Young Stalin, at 3-1. Catherine O’Flynn, winner of the First Novel prize with her mystery story What Was Lost, shares third place with the poet Jean Sprackland for her collection, Tilt, at 4-1. And the children's book winner Ann Kelley follows closely with odds of 9-2 for her book The Bower Bird.
Kennedy was one of five category winners of the Costa Book Awards — previously known as the Whitbread prize. The “most enjoyable” first novel, novel, biography, poetry and children’s book were chosen from 553 entries and they are now competing for the title Book of the Year and a £25,000 prize, to be announced on January 22. Each category winner received £5,000.
Related Links
Day by A. L. Kennedy
O’Flynn was the focus of attention when the award winners were announced on January 2, after she suffered 20 rejections from agents and publishers before one editor spotted its potential.
The best-selling British author, Joanna Trollope and her fellow judges were unanimous in their praise. They called it “an extraordinary book”, describing it as “a formidable novel blending humour and pathos in a cleverly constructed and absorbing mystery”.
Find out more about the Costa Book Awards
Posted by Beattie's Book Blog at 12:21 pm