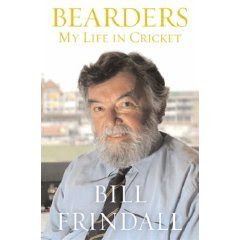 Bill Frindall, known to cricket fans everywhere as the ‘Bearded Wonder’, will be travelling around New Zealand in February and March to broadcast England's five one dayers and three test matches. His memoir Bearders is a must-have read for cricket lovers everywhere.
Posted by Beattie's Book Blog at 3:10 pm