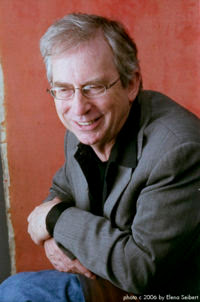 PETER CAREY INTERVIEW
Between two worlds
Peter Carey has lived in New York for 20 years, but has returned repeatedly to his native Australia in his fiction. Both cultures have been the guiding spirit of his work
Nicholas Wroe writing in The Guardian Saturday January 19, 2008
A few years ago Peter Carey had a drink with his friend and fellow adopted New Yorker Patrick McGrath, the only other writer he "really talks to" about the practicalities of writing. Some time during the evening McGrath told Carey about an image he had of a man or woman standing on the edge of an airstrip, and how he knew it was the start of a novel but didn't quite know how to proceed.

"That notion of starting work on a novel from an image played on my mind," recalls
Carey, "and soon enough I had my own picture of a woman and a child
walking along this particular road in Queensland with a storm on the way and
cars driving past. At that stage I thought of them as a hippy mother and her
little boy hitching from here to there. But I didn't really know much more
than that and although I tried to work it out, I ended up getting in a bit of
a tangle about what to do with them."
A few months later Carey met McGrath again and told him about the difficulties he was having with his image of the woman and boy. He asked how McGrath had dealt with his airstrip.
"'Oh that,' he said, 'I dropped that pretty quickly. It was going
nowhere.' So, thanks for that, Patrick!"
But the idea did bear fruit and Carey's new novel, His Illegal Self, published next month, includes a young woman and a boy in rural early 70s Queensland. They are no longer mother
and son and are in Australia having absconded from the upper-class
revolutionary end of the American counter culture. Another starting point for
the book was Carey's memories of his own time in a Queensland commune -
"much hippier and less political than the one in the book" - when it
turned out that someone who lived with them was on the run from the FBI for
conspiracy to import cocaine. "All the things that happened around that
were actually quite comic - driving around with bags of coins trying to call a
lawyer in Texas and so on - but it was also pretty scary and it stuck in my
mind."
Carey has lived in New York for almost 20 years. But long before his move some of his earliest fiction reflected on the relationship between Australia and America with the 1974
story "American Dreams" featuring American tourists arriving in a
small Australian town - "something utterly and surreally unlikely at the
time". However, throughout the rest of his career remarkably little of
his work has been set in the country he now calls home. His early novels Bliss
(1981) and Illywhacker (1985) were set in Australia as were, predominantly,
the Booker prize winning Oscar and Lucinda (1988) and True History of the
Kelly Gang (2000). One of the fictional power blocs competing in The Unusual
Life of Tristran Smith (1994) did evoke America, and his gloss on Great
Expectations, Jack Maggs (1997) inevitably made it to Dickens's England. His
more recent novels My Life as a Fake (2003), Theft: A Love Story (2006) and
now His Illegal Self, have all ventured farther afield, including passages in
America, but Australia has remained his primary location and focus.
For the rest of this intervew..........
Posted by Beattie's Book Blog at 3:52 pm