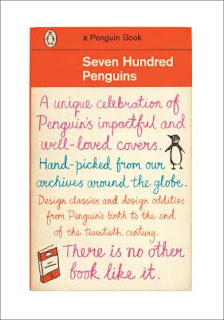 SEVEN HUNDRED PENGUINS
A collection of Penguin covers from Britain and around the world, Seven Hundred Penguins is a celebration of 700 Penguin jackets and what a treausre trove it proves to be.
I was absolutely filled with delight for a couple of hours yesterday as I trolled through this big fat 714 page Penguin paperback. Talk about a trip down memory lane............. from the beautiful to the garish, design classics to design oddities.
A full-colour, sensuous delight, with one jacket on every page, the featured jackets represent the personal favourites of Penguin staff from offices all over the world, and run from Penguin's birth in 1935 to the end of the twentieth century.
Throughout this beautiful book there are jackets that bring back a flood of memories of the first time a book was read; there is The Mersey Sound featuring Adrian henri, Roger McGough and Brian Pattent which I remember selling by the score; J.P.Donleavy's Schultz with the protagonist's trousers around his ankles; Summer Cooking by Elizabeth David; the Joys of Yiddish by Leo Rosten; Yukio Mishima's The Sailor Who Fell From Grace With The Sea, (remember those King Penguins?); The Great Gatsby by F.Scott Fitzgerald; Lolita by Vladimir Nabokov; I Claudius by Robert Graves (remember the wonderful television adaptation?); Edna O'Brien's A Pagan Place; and of of course Richard Adam's classic, Watership Down. Many many more of course, oh the memories this unique tome invoked. I loved it and it will become a treasure on my bookshelf.
Hey, nearly forgot to mention there is even a Penguin NZ cover! Reconnaissance by Kapka Kassabova. Great..
Posted by Beattie's Book Blog at 1:23 pm