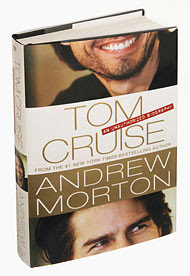 LOCAL PUBLISHER DUMPS TOM CRUISE BOOK
Report from Sydney Morning Herald:
Pan Macmillan will not print a local edition of the book Tom Cruise, An Unauthorised Biography in Australia due to legal concerns, a move that has been labelled an act of censorship.
But the book, which alleges that Scientology played a major role in the breakdown of the marriage between Hollywood superstar Cruise and Nicole Kidman, will still be imported for sale at independent bookshops.
Scientologists have denied claims by the book's author, Andrew Morton, that Kidman was threatened with blackmail if she spoke out against the controversial religion.
The Cruise book, which is expected to be a best-seller overseas, will be released in a blitz of marketing and publicity in the US overnight.
The Church of Scientology and Cruise's lawyer have said the book is inaccurate.
A manager at Sydney bookshop Kinokuniya said that books were normally printed and stocked on shelves until legal action was taken.
"Basically our brief as a company is to have the best range of books, so until there is an actually legal case put against the book we'll continue stocking it," Sydney store manager, Steve Jones, said.
"I think the legal issues with the book are purely in the hands the author and publisher, it's not up to the retailer to censor the book.
"A company like Kinokuniya will sell what the customers want. We're not dictated by author, publisher community group."
It is understood local publisher Pan Macmillan is fearful of legal claims by Cruise and the Church of Scientology if it publishes a local version.
"We received the pages at the end of last year and we went to our lawyers, who came back and said there were serious legal problems with it so we decided not to publish," Pan Macmillan publicist Jeannine Fowler said.
"As far as I know we are acting on legal advice."
She denied it was an act of censorship and said they decided not to publish because it would have been "breaking the law".
She was unable to provide details with what specific laws were cited by the company's lawyers.
She was also unable to give other examples of when Pan Macmillian had decided to not publish books due to legal reasons.
Ms Fowler said that they book would have sold well locally.
"I imagine there would have been some interest, like with any of these unauthorised biographies, " she said.
Church of Scientology International general counsel Elliot Abelson denied the church was trying to censor the book in an earlier report.
Two major book retailers, Dymocks and Angus & Robertson, have also said they have legal concerns about the book and will not import copies directly from the US publisher, St Martin's Press.
Online Australian book retailer Booktopia sold four copies of the Cruise book within a day of The Sun-Herald breaking the news the book would not be sold through major local retailers, said owner Tony Nash.
"People read the article, then they went online and bought it from us," Mr Nash said.
He compared this to the 150 copies of a book by comedian Jerry Seinfeld's wife, Jessica, Deceptively Delicious, that were sold after US chat-show host Oprah Winfrey praised it on her show.
"Unless the government or lawyers instruct us to to pull it, like we had to do with a euthanasia book last year, we will sell it."
Sydney's Gleebooks will also sell the book.
"Had Pan Macmillan had an injunction slapped on them after they'd released the book, or a legal action had been made, then absolutely, without fail, they would advise all booksellers to remove copies from their shelves," co-owner David Gaunt told ABC News.
A spokeswoman for Borders bookshops blamed the lack of a local edition on its decision not to sell the book.
"Had Pan Macmillian published it in Australia, we would stocking it," said Josy Shaw, marketing manager the Borders Asia-Pacific.
Posted by Beattie's Book Blog at 7:24 am