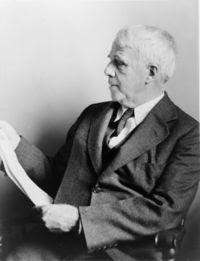 Editing of Frost Notebooks in Dispute
Now a recently published compendium of his personal notebooks is coming under attack from two critics who say that the editor of the volume, Robert Faggen, mistranscribed hundreds, if not thousands, of Frost’s words.
Mr. Faggen, a professor and chairman of the department of English at Claremont McKenna College in California, published his book, “The Notebooks of Robert Frost,” last January. In the 809-page volume from Harvard University Press, Mr. Faggen collected the contents of 47 of Frost’s notebooks as well as some loose pages that are stored in archives at Boston University, Dartmouth College and the University of Virginia.
The volume, which represents the first time the notebooks have been published in their entirety, was widely praised by reviewers. For scholars and fans of Frost’s work, the notebooks, filled with poetry fragments, lists, lecture notes and tangential musings, provide insight into his thinking and creative process. In a review published last February in The New York Times Book Review, David Orr, who writes frequently about poetry, wrote, “Any Frost reader will benefit from Faggen’s thoughtful introduction and be intrigued by the way in which concepts from these largely aphoristic journals animate the poems and vice versa.”
But in a review published in October in Essays and Criticism, a British literary journal, James Sitar, who recently completed his Ph.D. in editorial studies at Boston University and is now the archive editor at poetryfoundation.org, the Web site of the Poetry Foundation in Chicago, said he reviewed four of the original Frost notebooks housed in Boston University’s archives and found “roughly one thousand” errors in Mr. Faggen’s work.
“Broadly speaking, then, publication of this edition is a great occasion, and readers and scholars should be grateful,” Mr. Sitar writes, “but their excitement about this new material may be lessened when they notice, as early reviewers have not, that the transcription is untrustworthy.”
Most other reviewers have not compared Mr. Faggen’s work with the original notebooks and therefore have no way of knowing whether some of the more obscure passages or spelling and grammatical mistakes are Frost’s or Mr. Faggen’s.
But one other critic, William Logan, a poet and English professor at the University of Florida, also compared Mr. Faggen’s transcriptions with about 30 pages from the original notebooks, this time from the Dartmouth archives. Like Mr. Sitar, he concluded that Mr. Faggen’s work is filled with errors.
For rest of story.........
1941 photo of Robert Frost (above) from Wikipedia website.
Posted by Beattie's Book Blog at 7:26 am