DO YOU NEED TO READ BOOKS TO BE CLEVER?
By Denise Winterman BBC News Magazine (via Library Link of the Day).

It's the National Year of Reading. Just as well, as one in four adults say they haven't read a book in at least a year. With so many other ways to get information these days, do we still need books?
When did you last pick up a book to hunt out a nugget of information instead of Googling it? Or read a novel instead of powering up the PlayStation or the telly?
Some time ago, quite possibly, especially if you're a man and aged 16 to 24 - half haven't read a single book in the past 12 months, making this group the least likely to read books, according to government statistics.
The rest of us aren't much better. And some, including Victoria Beckham, claim never to have read a book at all.
WHERE AND WHEN WE READ 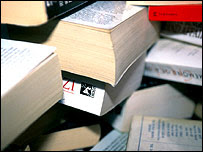 In bed
On holiday
On way to work
In the bath
On the toilet
Source: Bedtime Reading Week
Yet books are hyped as life changing and a way out of crime, poverty and deprivation by Prime Minister Gordon Brown, who launched the National Year of Reading on Wednesday. Quite simply, they have the potential to open up new worlds for the reader.
So why don't more of us make use of these repositories of knowledge and, with so much information to be gleaned online and from the TV, do we need to read books any more?
"They're vital to learning. Half the population don't go to football matches but that doesn't make football any less important," says Professor John Sutherland, who has chaired the Booker prize judging panel.
Books are essential because at their very heart is the storage of information, he says.
"The best storage system we have is the book. Few artefacts have lasted as enduringly - and few will. If you dropped Chaucer into the middle of Oxford Street today he wouldn't have a clue what was going on, but if you took him to a bookshop he'd know exactly what they were, even be able to find his own work."
And every book has a part to play in our accumulation of knowledge, right down to autobiographies by the likes of Peter Andre and Kerry Katona.
"Books are an eco-system, the bad ones make the good ones possible," says Prof Sutherland. "Victoria Beckham's autobiography pays for likes of Andrew Motion."
But while books have great cultural value, others argue that you don't have to read them to be intelligent and knowledgeable.
"I didn't read a book last year and don't know when I will read one," says Jamie Sharp, 37. "That doesn't make me illiterate or stupid, I just get my information in other ways.
"I read a paper everyday and use the internet. That probably makes me better informed than a lot of book readers out there. They may read a book but it's just as likely to be David Beckham's autobiography as it is Shakespeare."
And reading involves intellectual snobbery, he says. "It always has to be about certain types of books. Often people just read them because they think they should, not because they want to. Sometimes they pretend to have read them to look intelligent."
He has a point - 40% of people admit to lying about having read certain books, according to a study published last year by the Museums, Libraries and Archives Council. And half read the classics just because we think it makes us look more intelligent.

Basically, not everyone is a natural reader. Books have also lost their "chic", according to some.
Some books do booming business
"If you try and sell your house, estate agents will tell you to get rid of the books, they are viewed as tired and middle aged," says Prof Sutherland.
Despite this, book sales in the UK are huge and on the rise. Last year we bought an estimated 338 million books, at a cost of £2,478m. This was 13% higher by both volume and value than five years ago, according to the Book Marketing Limited's latest Books and the Consumer survey.
It appears that while books might be disappearing from our homes, they are still a treasured part of our culture.
"Britain produces more titles per person than any other country in the world," says Prof Sutherland. "That's the real measure of how important they are to us."
Being able to read has never been so important.
Books are important, but it's reading itself is an essential skill, says Honor Wilson-Fletcher, project director for the National Year of Reading.
"It's not for nothing that books have been burned over the centuries," she says. "They are repositories of ideas and ideas empower people and broaden their horizons.
"But because the cultural landscape is changing so much we need to recognise every variety of reading and acknowledge being able to read has never been so important.
"No medium is less important than any other, be it a classic novel, Scott's last message from the North Pole, one of Morrissey's lyrics or graffiti on a wall - they can all educate and change lives. This is not a year of worthiness, it's a year of reading."
Posted by Beattie's Book Blog at 7:01 am