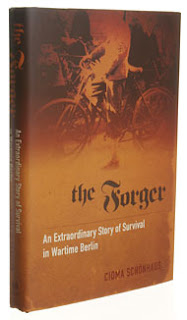 Ruses and Daring Escapes by a Jew in Nazi Germany

In June 1942 a 20-year-old Jew named Cioma Schönhaus stood in front of a Nazi bureaucrat in Berlin for final processing before being deported to a concentration camp in Poland. Asked if he had any money, he replied, “Yes, my lucky penny.” The penny went into the coffers of the Third Reich, duly noted in an account book.

“No further mention of luck,” Mr. Schönhaus recalls tartly in “The Forger,” his stirring account of life on the run in wartime Berlin.
Even without the penny, luck stayed with him, allowing him to beat the odds and survive. A last-minute deferment saved him, but not his parents and other relatives, from the transport trains headed east. As a skilled worker at a munitions factory, he was deemed essential to the war effort. Later, when the noose tightened again, he found work as a document forger for an underground network devoted to helping Jews. He eventually escaped across the border to Switzerland, where he lives today, the founder of a successful advertising and graphic art studio in Basel.

In the vast literature devoted to the Jewish experience under the Nazis, Mr. Schönhaus’s slim book deserves a special place, as much for its tone as for the remarkable events it records: a catalog of hairbreadth escapes, clever ruses and brazen coups. The background is undeniably grim, and his personal circumstance dire, but Mr. Schönhaus relates his experiences with an often joyful bounce and a dry sense of humor.
If the prospect of imminent death concentrates the mind, as Samuel Johnson observed, it can also sharpen wit.

Mr. Schönhaus, the son of Russian immigrants, tells his story in compressed vignettes that shine a brilliant, unfamiliar light on Germany under the Nazis. Among other things “The Forger” provides a fascinating look at the dodges employed by all sorts of Germans coping with wartime scarcity. Through mundane details he exposes some of the complexities of life under a totalitarian regime and the unexpected acts of decency that allowed him to survive, to hope or, at the very least, to enjoy a few moments of civilized human contact.
The owner of an art gallery, sensing that Mr. Schönhaus and his girlfriend might be interested, conducts a private backroom tour of works by banned artists like Emil Nolde and Max Beckmann. The night foreman at the munitions factory whispers instructions into Mr. Schönhaus’s ear on how to sabotage the machine-gun barrels he is filing down.
Mr. Schönhaus, a young graphic design student, has the brash confidence of youth and a trickster’s zest for dangerous games. He and his girlfriend, for example, put snaps on their yellow stars, placing them in their pockets so they can go into shops and restaurants, and putting them back on when Nazi officials or the police loom.

Such subterfuges come in handy when Mr. Schönhaus, sensing danger, leaves his munitions job and goes underground. By chance, he falls in with Dr. Franz Kaufmann, a former government minister who, at great personal risk, supplies false identity papers and other documents to Jews living illegally in Germany.
Mr. Schönhaus applies his artistic training to the duplication of official stamps, turning out fake passes and papers in a secret warehouse in the mornings and enjoying Berlin to the fullest in his off hours. “In spite of the goods trains you must say ‘yes’ to life,” his ever-optimistic father tells him in a dream. “As our representative you have a duty to experience all the pleasures we were denied.”

Bravado, cunning and carelessness are Mr. Schönhaus’s calling cards. When the Gestapo seals off the rooms of family members who had been deported, he and a friend unglue the seals and sell the furniture and other possessions on the black market.
Well paid for his forgery work, Mr. Schönhaus eats at good restaurants, often surrounded by Nazi functionaries, on the theory that the police do not look for a criminal in the station house. To secure a place to sleep, he shows up at a government office, claiming that he had to vacate his apartment to make space for an elderly uncle who had been bombed out of his residence in Cologne.
Supplied with a list of landlords willing to take in boarders, he makes the rounds, arriving at each address in the early evening and promising to register with the police, as required, in the morning. When morning comes, he announces that a letter has arrived at home, summoning him for active duty in the Army. Thus he moves across Berlin in a series of one-night stands. Ingenuity is undermined, however, by his bad habit of constantly losing his own forged identity papers.

The kindness of others, and the unfathomable stupidities of the regime, help him along. Decent Germans hide him. When the Kaufmann ring collapses, exposed by an informer, he simply walks into a well-stocked map store and buys a complete set of guides to areas along the Swiss border.
With a book by Joseph Goebbels in his knapsack for insurance, Mr. Schönhaus hops on his black-market bicycle and, with bombs raining down on Berlin, starts pedaling toward freedom. The reader’s heart lifts. Reason says it is impossible to escape Nazi Germany by bicycle. But by this point it is evident that the impossible is Mr. Schönhaus’s stock in trade.
Posted by Beattie's Book Blog at 7:20 am