BOOKS OF THE TIMES
If You Can’t Win the Case, Buy an Election and Get Your Own Judge

By Janet Maslin writing in The New York Times
January 28, 2008
“The Appeal” is John Grisham’s handy primer on a timely subject: how to rig an election. Blow by blow, this not-very-fictitious-sounding novel depicts the tactics by which political candidates either can be propelled or ambushed and their campaigns can be subverted. Since so much of what happens here involves legal maneuvering in Mississippi, as have many of his other books, Mr. Grisham knows just how these games are played. He has sadly little trouble making such dirty tricks sound real. 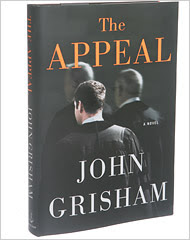 THE APPEAL
By John Grisham
Doubleday. $27.95.
(Published by Century in Commonwealth NZ$40)


Building a remarkable degree of suspense into the all too familiar ploys described here, Mr. Grisham delivers his savviest book in years. His extended vacation from hard-hitting fiction is over. However passionately he cared about the nonfiction events he described in “An Innocent Man,” his strong suit remains bluntly manipulative, no-frills storytelling, the kind that brings out his great skill as a puppeteer. It barely matters that the characters in “The Appeal” are essentially stick figures. What works for Mr. Grisham is his patient, lawyerly, inexorable way of dramatizing urgent moral issues.
The jumping-off point for “The Appeal” is that a mom-and-pop law firm wins a big Mississippi verdict, triumphing over a chemical company that has spread carcinogenic pollutants. But this victory could turn out to be hollow, because the deep-pocketed corporate defendant isn’t giving up without a fight. The New York-based Krane Chemical swings into combat mode, first by taking stock of these small-town lawyers. The mom and pop are Wes and Mary Grace Payton: nice people, good parents, nearly broke. Krane’s stealth envoys quickly determine that it wouldn’t take much to push the Paytons over the edge.
But the Paytons themselves are little more than a nuisance to Krane. The precedent created by their case is what matters, and the company’s real objective is to make itself safe from similar attacks in the future. In order to arrange that, Krane needs the Mississippi Supreme Court. Another nuisance: Mississippi Supreme Court justices can’t simply be appointed. They have to be elected.
Now the stakes start to ratchet up. So a corrupt senator puts Krane’s greedy billionaire C.E.O., Carl Trudeau, in contact with Troy-Hogan, a mysterious Boca Raton firm that specializes in elections. There is no Troy. There is no Hogan. There is no record of the nature of the business conducted by this privately owned corporation, which is domiciled in Bermuda. For two separate fees, one acknowledged and the other, larger one delivered quietly to an offshore account, Troy-Hogan will do its magic. “When our clients need help,” says Barry Rinehart, Troy-Hogan’s main power player, who radiates the same expensive sartorial confidence that Trudeau does, “we target a Supreme Court justice who is not particularly friendly, and we take him or her out of the picture.”
This multipart process involves choosing a victim and creating rival candidates from scratch. Soon the stealth saboteurs have trained their sights on a justice named Sheila McCarthy. She is not a liberal ideologue, but she can be made to sound like one (“a feminist who’s soft on crime”).
She’s not an operator or a politician. She is unprepared for a campaign fight. And the only special interest group that ever supported her is suddenly a liability. (Anti-McCarthy mailings will trumpet the question “Why Are the Trial Lawyers Financing Sheila McCarthy?”) As Mr. Grisham points out in one of his book’s many moments of indignation, there’s no need for the architects of a smear campaign to answer such a question. All they have to do is keep on asking it.
Meanwhile the covert operators create their own man: Ron Fisk, a political newcomer. “They picked Fisk because he was just old enough to cross their low threshold of legal experience, but still young enough to have ambitions,” the book explains. Fisk is also new enough to be wowed by perks like private jets, which allow him to make so many more campaign stops than his rivals can, and by all the new attention lavished on him by his backers. He barely has time to wonder why they find him so appealing or where all those campaign funds are coming from.
And for a UK review read this one from The Times.
Posted by Beattie's Book Blog at 7:00 am