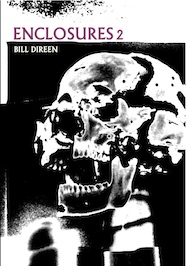 
Part 2 of a 3-part work in progress. This part is in five parts. Its published form is not intended to be seen as definitive.


Enclosures 2 is a collection of fiction, poetry, diary, utopia and zootopia. The partitions of Enclosures 2 take place in France, Germany, Australia and New Zealand, in an imaginary future, in a poem, and on a (possibly human) surface. It continues a cross-genre approach favoured in the early novel Nusquama/Utopia Rag, and used in purer form in Enclosures (2008). The opening section 'Europe, New Zealand', contains entries from two decades of living in, and of going between, Europe and New Zealand.


Enclosures 2 is another emblematic cross-genre novel of composite novellas. The enclosures are partitions of real or imaginary places, such as a basement recording studio or a possibly


human, possibly geographical, surface. They are also (cross-) sections of writing. Cut-ups of periods living in and going  between places coexist with bits of a destroyed novel (sequel to Jules, 2003). You will find here a utopian vision of Direen's home town, Christchurch, post-quake, following hard upon a poisoner's auditory hallucination of an unclassifiable music album.


Enclosures 2 spreads the net wide, searching for valid sources while pushing at the limits of genres. 'Valid' applies to the author's productive work as a writer. The author takes it on himself to work independently of existing publishing structures. He is confident about some aspects of the work and diffident about others.


Better known as a musician who brought fictional narrative to insurrectionist rock, Bill Direen's novels reverse the process, bringing his compositional nous to the world  of the book. And yet his novels may be seen as “evolving improvisations over time'.


He lives on the outskirts of Dunedin City, New Zealand. His Enclosures novels use different genres for their effect . They go where the writer's mind goes, into intimate, realistic and imaginary places. They try to describe reality by new means, to understand it, to isolate important issues and to take us towards a better society.


Bill Direen will be touring nationally as musician and writer in October 2016.
Posted by Beattie's Book Blog at 4:46 pm