Photo Credit: Josephine Sittenfeld
Kate, the protagonist of Curtis Sittenfeld's latest novel, Sisterland, is the mother of two young children, as is Sittenfeld herself. She shared some of the books she and her children all keep coming back to.

As the author of some rather long novels—my third one, American Wife, was a hefty 555 pages—I have great respect for those who can tell their stories succinctly. As the mother of two young children, I also appreciate a tale that’s as entertaining the hundredth time you read it as the first. I now understand more clearly than I did when I myself was young why certain picture book classics—Goodnight Moon, say, or Where the Wild Things Are—have attained their classic status. And since becoming a mother four years ago, I’ve been thrilled to discover new favorites. 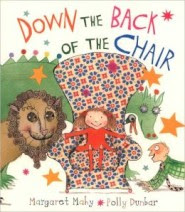 1. Down the Back of the Chair by Margaret Mahy and Polly Dunbar – A down-on-its-luck family decides to see what treasures might be buried down the back of the chair and finds far more than they could have hoped for: jewels, animals, a long-lost sibling. The rhymes and absurd humor here are both terrific. 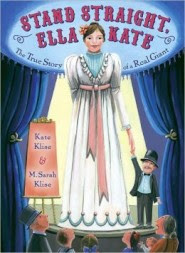 2. Stand Straight, Ella Kate by Kate Klise and M. Sarah Klise – In real life, Ella Kate Ewing was born in tiny Rainbow, Missouri, in 1872 and grew to be 8’4”. Her height both separated her from others and opened an unusual path forward—she traveled the country as part of museum exhibits and circuses and made lots of money. Her story is told here in a straightforward yet very moving way, with the amazing details, and the underlying message of self-acceptance, speaking for themselves. My husband thinks I should write a novel about her, but this book has already captured her life perfectly. 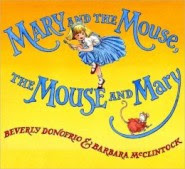 3. Mary and the Mouse, the Mouse and Mary by Beverly Donofrio and Barbara McClintock – A little girl named Mary grows up in the same house in which a little mouse is also living. The two secretly become allies, and in adulthood, their daughters develop a similar kinship. The illustrations are excellent, and the tone is smart and sweet. Interestingly, Mary’s family is clearly affluent, yet, unlike in many children’s books (such as Imogen’s Antlers, which is also great) their affluence is treated matter-of-factly rather than mocked. 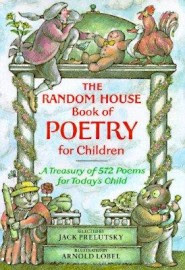 4. The Random House Book of Poetry for Children; selected by Jack Prelutsky and illustrated by Arnold Lobel – I swear I would love this book even if Random House weren’t my publisher. It contains poems for every mood you or your children could find yourself in, from the reflective to the nonsensical, and for every amount of time you have, whether that’s a quick dip or a long afternoon on the couch. We received this book as a gift, and it’s one of my favorite gifts to give other families. 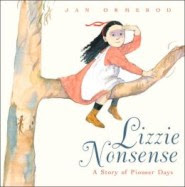 5. Lizzie Nonsense by Jan Ormerod – In 19th-century rural Australia, a girl helps her mother and looks out for her baby brother when her father travels 50 miles to town to sell sandalwood. Lizzie has a vivid imagination, but the real details of her life in the bush—snakes, dingoes, turnips for dinner—are wonderfully vivid, too. 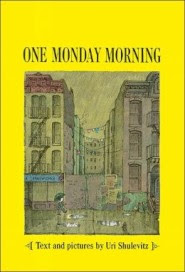 6. One Monday Morning by Uri Shulevitz – A boy in New York imagines that a series of increasingly numerous and distinguished guests is visiting his apartment when he isn’t there. This book, which is another testament to the rich inner lives of children, has a delightful rhythm and a fun twist at the end.

7. Along a Long Road by Frank Viva – A bicyclist goes on a long ride through rural and urban New England, passing trees, oceans, cities, and people. The language is spare, and the illustrations are distinct and wonderful. My children actually warmed to this book before I did, but now I’m a total convert. 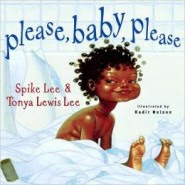 8. Please, Baby, Please by Spike Lee, Tonya Lewis Lee, and Kadir Nelson – Very cute rhymes and illustrations chronicle a day in the life of a toddler who gets up to all sorts of mischief (drawing on the wall, fussing when it’s time to leave the playground). The book ends with “Baby Please,” as my two-year-old refers to the unnamed protagonist, going to bed, which makes it a perfect night-time book. (And yes, this is by that Spike Lee, along with his wife.) 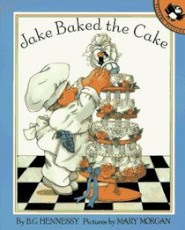 9. Jake Baked the Cake by B.G. Hennessy and Mary Morgan – The preparations for a wedding include the patient and merry cake-baking by a man named Jake. First published in 1990, the book’s illustrations are endearingly 1980s-ish (the bride’s wedding dress rivals Princess Diana’s), and the narrative might seem cloyingly heteronormative to some, but the rhymes are irresistible, capturing the festive air of hope that a wedding inspires.

10. Mama Loves You by Caroline Stutson and John Segal – There’s no shortage of books in which parents express their love for their offspring, but this one—featuring rhymes about various animals—is exceptionally charming, with all the affection and none of the sentimentality. My two-year-old and I both have it memorized.
Posted by Beattie's Book Blog at 8:34 am