'Selling books is what I do. I am a specialist'

As saviour-elect at Waterstone's he is greeted with near ecstasy, but can Daunt revive the ailing chain?
The Independent on Sunday, 29 May 2011 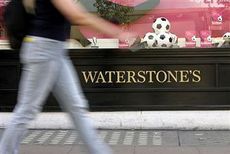 Can James Daunt, favoured bookseller of London's chattering classes, singlehandedly rescue the traditional British book trade from the jaws of Tesco, Amazon and digital books?
That is the question on everyone's lips from authors and publishers to independent booksellers since news broke that the Russian billionaire Alexander Mamut had bought Waterstone's from HMV for £53m, and anointed Daunt, who comes from a long line of Irish Protestant clerics, as saviour-elect.
Daunt certainly intends to try, and he believes passionately in the cause. "I am doing it because it matters," he says, dismissing motives of money or power with one of his diffident smiles. "Selling books is what I do. I am not interested in any facet of retailing apart from books. I am a specialist."

Daunt does things differently from the rest of us. The first time I met him we had both been skiing with our families. When I told him we had been to a British-run chalet in a top resort in the French Alps, Daunt looked at me pityingly. His idea of a ski-ing holiday was to fly to Geneva, hire a car and drive into the mountains until he found a pleasant base hotel. From there, he told me, he would drive up to a different resort every day – this with his wife, Katy, and two small children.
I realised then that Daunt is adventurous, enviably energetic and quite wacky. Tall and wiry, he has a manner both calm and quietly dangerous. Although unfailingly charming, there is an air of gentle disdain about him as if he holds a secret to life at which ordinary mortals can only guess. Yet he is surprisingly domesticated and a warm hands-on father, cycling with his two daughters to school, reading them stories and baking bread at weekends. He also enjoys cooking when friends come round – large, unusual fish a speciality.
Physically tough, he can be seen riding his bicycle round London in most weathers, rarely wearing more than a pullover. Motorists who cut him up get short shrift. Formal exercise would be vulgar but he plays tennis and swims in the North Sea near his country home in Suffolk.
He is certainly good at keeping secrets. Several times in the past year we have discussed the future of the book trade on social occasions, but there has never been the merest hint that behind the scenes he was working flat out on a feasibility study to buy Waterstone's with Mamut.
His appointment has been greeted with little short of ecstasy by the book trade, where tales of the inefficiencies of Waterstone's, Britain's largest bookstore chain since the collapse of Borders, are legendary. "It is dead, there is barely a pulse beating," commented one analyst. Sales have been steadily falling although it is still profitable.
"If anyone can save Waterstone's, James can," says Andrew Franklin, who runs Profile Books, a publisher. "He is a brilliant bookseller. He understands books and the customers and he is tough but fair with publishers."
Some, though, have pointed out that running seven Daunt Books stores in posh areas of London such as Hampstead, Notting Hill and Chelsea is a bit different to running 290 Waterstone's shops spread around the country. While that may be true, Daunt retorts that most of the Waterstone's estate is also primarily in middle-class areas – "because that is where people who buy books live", he says impatiently. And he believes that many of the same principles he uses at Daunt Books will apply, primarily the pursuit of excellence. "If the book shops are good enough, people will have a real passion for them," he says. "Plenty of Daunt customers use Amazon and have Kindles, but they still come into my bookshops."
His first task will be to revive staff morale, which had sunk to an all-time low as Waterstone's future under HMV hung in the balance. "In a retail business employing 4,500 staff, the people really matter. They must be empowered and engaged," says Daunt, who prides himself on keeping his senior people for a long time. "There are 24 people who have been with me between five and 18 years." That is why he has no fears for Daunt Books, which will be run by some of those people in the three to four years he estimates it will take to restore the Waterstone's patient to full health.
At Waterstone's, he hopes to foster a similar atmosphere: "The bookshops will become more autonomous so that people who work and shop there have a sense of ownership."
There are, though, some obvious differences. It will not be practical to end Waterstone's three-for-two books policy, and the range will be broader. In the past, Daunt has said he would never sell a book he did not like. He wavers a little: "I will still have thresholds. I would never sell porn or gratuitous violence."
There will also be more sheer celebration of books. At Daunt Books, something is always going on, whether it be a book launch, a talk by a local author, or a visit to a school. "A bookshop is part of the community," he says. "People buy tickets to hear an author talk, chat, have a glass of wine and afterwards everyone feels good about being in a bookshop."
Some of this can be injected into Waterstone's and he intends to make each store more geared to its local market – intriguingly just what Marc Bolland was saying about his plans for Marks & Spencer last week.
And what of the future of "The Hub", the hugely expensive centralised ordering system at Waterstone's into which orders to publishers disappear for weeks? He gives me a withering look. "I would fear for that, wouldn't you?"
Instead he intends to let each bookshop do its own ordering using sophisticated computer systems. "You know there are computers that manipulate data brilliantly."
Rest of story at The Independent.
Posted by Beattie's Book Blog at 8:36 pm