GREAT NEWS FROM THE CAPITAL - Wellington first for free wi-fi 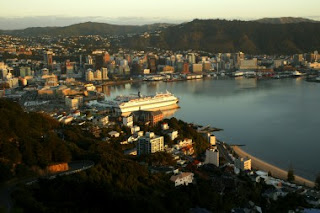 Wellington will become the first city in New Zealand to provide free wireless internet – wi-fi – across most of its central business district, with a council-run network starting before the Rugby World Cup.

All internet sites will be accessible with the network but Wellington City Council could block some if problems emerge.
The council will provide $80,000 to establish the network and $216,000 a year to maintain it, but hopes to recover money through sponsorship of its access page.
The network will be available in most of the area from Waitangi Park and Courtenay Place to Westpac Stadium, as well as Cuba St. Tourist spots will be added later, including the zoo and Zealandia. The network is designed for outdoor use at ground level in public places but should work through glass in some areas.
Each free wi-fi session can last up to 30 minutes but users can log on more than once.
The network would be prioritised for web browsing and email traffic to avoid users streaming or downloading large files and disadvantaging others.
Wellington Mayor Celia Wade-Brown said free wi-fi was a "significant step in our city's evolution to a creative digital city".
It will go live in August, shortly before more than 25,000 Rugby World Cup fans start arriving.

Read the full story at The Dom-Post.

This is wonderful news Kelly, thanks so much for bringing it to my notice. I have posted the link you provided as a separate entry on my blog this afternoon.
Thanks again, very exciting.