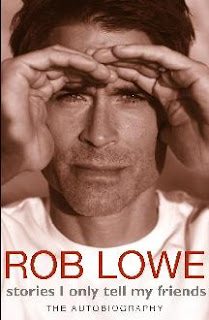 Intimate, honest, wryly funny, and sometimes deeply moving, Rob Lowe’s autobiography is his personal account of his life, both in show business and with his family, of sobriety and of fatherhood.  The actor, political activist and now writer looks back on his travails as a fledgling and misunderstood child actor in Ohio, his transition to the rough, counter-culture free-for-all that was Malibu in the mid-1970s, his wild ride from as teen idol to movie star at the beginning of today’s youth movement in entertainment to his current status as one of Hollywood’s top actors.
Included are sixteen pages of photos which I found fascinating.
Rob Lowe is a film and television actor who has played such diverse characters as a teenage rebel (The Outsiders) and a White House senior staffer (The West Wing). Outside of acting, he is involved in politics. He lives with his wife and two sons in California.
BLOOD BONES & BUTTER
Gabrielle Hamilton
Chatto & Windus - $37.99 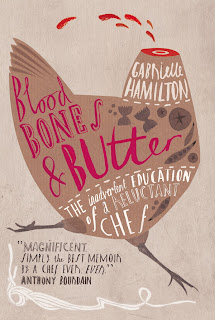 A sharply crafted and unflinchingly honest memoir that follows Gabrielle Hamilton's culinary education - from growing up in a food-centric rural home in New Jersey with a French mother and bohemian father, to killing her first chicken, to backpacking around the world alone at nineteen, to the vagaries of finally opening her own restaurant in New York City. In between are the often beautiful and sometimes coarse stories of all the places and people who shaped her journey.
Gabrielle Hamilton is the chef/owner of Prune restaurant in New York’s East Village. The author received an MFA in fiction writing from the University of Michigan, and her work has appeared in The New Yorker, The New York Times, GQ, Bon Appétit, Saveur and Food & Wine. She has also authored the eight-week “The Chef” column in The New York Times, and her work has been anthologized in six volumes of Best Food Writing. She has appeared on Martha Stewart and the Food Network, among other TV. She currently resides in Manhattan with her two sons.
HEROES & SPARROWS – a celebration of running
Roger Robinson
Streamline Creative - $34.95

First published in 1986, Heroes & Sparrows has been hailed by reviewers and the worldwide running community as a major contribution to the understanding and appreciation of the sport. It has been called one of the best running books of all time.


This 25th anniversary edition includes introductory essays to each section, where Roger Robinson relates the original chapters to the 21st century running movement.
A Postscript keeps this classic of the first running boom as fresh and inspiring as a morning run.

These days my morning runs have become morning walks but I often think back fondly to my running days in the YMCA Harriers in Gisborne as a schoolboy and then years later running three marathons and countless half-marathons in the 1980’s, and some 14 Round-the-Bays runs. Roger’s wonderful collection of essays and articles took me happily back over the years. Thanks Roger, great stuff.


Heroes & Sparrows is not an autobiography, but its varied writings grew directly from my involvement in running and racing at all levels in the 1980s. Twenty-five years later, there seemed one major personal omission – my best marathon, run in May 1981. I had never written about it, probably because it was only later that year that I began to write regularly for Tim Chamberlain's New Zealand Runner. Preparing this 25th anniversary edition happened to coincide with an invitation to write about that Vancouver race for the first
time, for its 30th anniversary in 2011.


So here are my memories of that race, drawn partly from the race diary I always kept, with some thoughts and advice about marathon running that might be of service to the new generation of runners and readers this edition is intended to serve. In my own career, it partly fills the gap between my belated marathon debut at New York in 1980 (‘A Field Full of Folk’), and my Boston record in 1984 (‘Boston from the Inside’).
Anyway, every runner will understand that it's nice to end with a good race. And I wanted to make the book's last word “life.”
Two of my favourite photos from the book follow:
Alison Roe winning the New York Marathon in 1981, and Round the Bay Run in 1978. 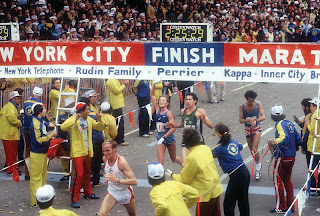 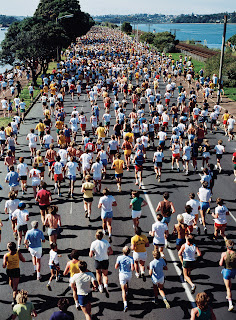 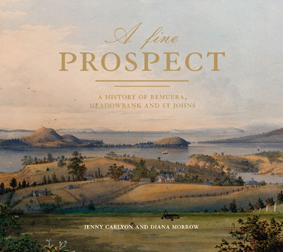 In this richly illustrated and comprehensively researched history the authors (both with PH’D’s in History) record the sense of noblesse oblige that has long pervaded Remuera life.


I have had such fun dipping into my advance copy of the book over the past week (publication date 17 June). It is a fascinating account of this part of Auckland’s eastern suburbs with the most readable text being complemented by hundreds of photographs and illustrations., some of which appear below. 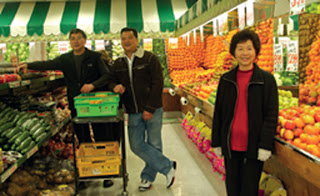 For many Aucklanders, not just Remuera residents, Jack Lum is the number one source of fresh fruit and vegetables. Lum started his business in the early 1970s at 365 Remuera Road, on the Clonbern Road corner, in premises previously owned by the Wong family, moving to the current Clonbern Road shop in the 1990s. Born in New Zealand, he is the son of a Chinese couple who immigrated to New Zealand in the 1920s. They worked as market gardeners in Mangere, where Lum grew up. He and his wife Carrie, who live in St Johns, are shown here in their very popular shop with their son Michael, who also works in the business. 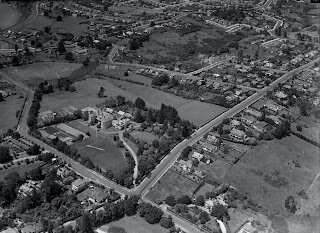 The bottom of Victoria Avenue in the 1930s. 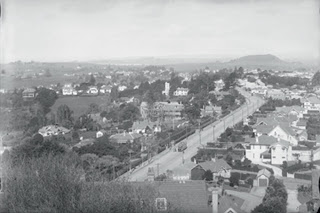 This photo, taken between 1910 and 1919, looks south from Mount Hobson along Remuera Road. The newly built Arts and Crafts houses are on the right-hand side, with King’s School and Ladies’ College on the left
Posted by Beattie's Book Blog at 12:10 pm