How should 'controversy' be pronounced? How are 'refute' and 'decimate' misused? Kingsley Amis's guide, The King's English, revealed all. Martin Amis celebrates his father's interest in language 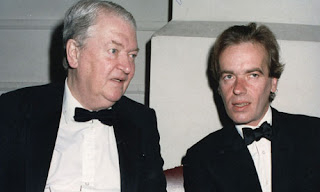 A way with words... Kingsley and Martin Amis in the 1990s. Photograph: Dave M Benett/Getty Images
Kingsley Amis was a lenient father. His paternal style, in the early years, can best be described as amiably minimalist – in other words, my mother did it all. It should be noted, though, that if I did come across him (before he slipped back into his study), he always said something that made me laugh or smile. This went a long way. And the humour usually derived from the originality of his phrasing. When I was 16 or 17, and started reading books for grown-ups, I became, in his eyes, worth talking to. And when, six or seven years later, I started using the English language in the literary pages of the newspapers, I became worth correcting. I was in my early-middle 20s; my father was still amiable, but he was lenient no longer.

"Has your enormity in the Observer been pointed out to you?" he asked with enthusiasm over breakfast one Sunday morning (I had left home by then, but I still spent about every other weekend at his house). "My enormity?"
I knew he was applying the word in its proper sense – "something very bad", and not "something very big in size". And my mistake was certainly atrocious: I had used martial as a verb.
Later, while continuing to avoid hopefully (a favourite with politicians, as he insists), I pooh-poohed his reprimand about my harmless use of the dangling thankfully. I also took it in good part when, to dramatise my discipleship, as he saw it, of Clive James (a very striking new voice in the 1970s), Kingsley started reading out my reviews in an Australian accent. But there was one conversation that I still recall with a sincere moan of shame: it concerned the word infamous.

In a piece about the "Two Cultures" debate, I referred to FR Leavis's "infamous crucifixion of CP Snow". "You leave us in no doubt," said Kingsley watchfully, "that you disapproved of it." I remained silent. I didn't say, "Actually, Dad, I thought infamous was just a cool new way of saying controversial."
Infamous will in fact now serve as the reigning shibboleth (or "test word", or giveaway). Anyone who uses it loosely, as I did, is making the following announcement: I write without much care and without much feeling. I just write like other people write. As Kingsley puts it in The King's English (and "the King", by the way, was a nickname he tolerated):

Both adjective and noun [infamous and infamy] used to be terms of extreme moral disapproval, equivalent in depth of feeling to 'abominable' and 'wickedness'. Then quite recently . . . the adjective weakened in severity to something on the level of 'notorious' [or, he might have added, simply 'famous'] . . . The noun infamy, although seemingly out of use, retains its former meaning, but infamous is now unusable through ambiguity.
Full story at The Guardian.
Posted by Beattie's Book Blog at 8:49 am