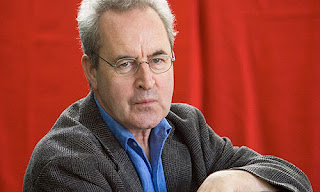 'I've been wrestling with Kafka since I was an adolescent' ... John Banville. Photograph: Murdo Macleod
Languishing in the Nobel prize for literature odds last year at 66/1, Irish author John Banville may be in with a better shot this time round after landing the Franz Kafka prize, a literary award with an uncanny ability of predicting future Nobel laureates.
The prize is given by the Kafka Society to an international author whose work is "exceptional for its artistic quality", and "addresses readers regardless of their origin, nationality or culture, just like the work of Franz Kafka". It has been won in the past by Elfriede Jelinek and Harold Pinter, both of whom went on to take the Nobel later that year. Banville pronounced himself "proud and pleased and honoured" to be chosen by the prize's jury.


The author, who won the Man Booker for his novel The Sea, said there was "a certain childish pleasure in being singled out to get a prize". "It's foolish to deny it – we try to look down on the Booker but everyone's dying to win it – it's the biggest toy in the shop."

The Kafka prize is also, he said, "one of the ones one really wants to get. It's an old style prize and as an old codger it's perfect for me ... I've been wrestling with Kafka since I was an adolescent. I think he's a great aphorist, a great letter writer, a great diarist, a great short story writer, and a great novelist – I'd put novelist last."


Banville wins $10,000 (£6,000) and a bronze statuette of the Kafka monument in Prague. "It will glare at me from the mantelpiece," he said. "Roddy Doyle congratulated me on winning, and I said I wonder what kind of award Kafka would have given. Roddy said that it wouldn't have stayed still on the mantelpiece."

But animate or inanimate, Banville wasn't so sure the prize would improve his Nobel chances. "The majority of people who've won it didn't win the Nobel," he said, pointing to previous winners who include perennial Nobel contenders Philip Roth and Haruki Murakami. "But hold on, the other phone's ringing, it must be Stockholm."
Posted by Beattie's Book Blog at 8:24 am