BOOKMAN BEATTIE TO ATTEND MAN BOOKER PRIZE AWARDS DINNER IN LONDON.
Bookman Beattie is delighted to announce that he will be attending the gala dinner being held in London on Tuesday 16 October. He will be in London from 9 October leaving to come home the day after the Awards Dinner and will be posting reports on the London book scene to his blog each day. 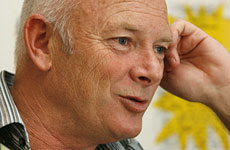 As far as can be ascertained he will be one of three New Zealanders there to support shortlisted New Zealand author Lloyd Jones, (Mr.Pip), the others being Lloyd's New Zealand publisher Geoff Walker, and his literary agent Michael Gifkins.
The timing is designed to fit in with the

Frankfurt Book Fair, which is on the previous week and closes the weekend before the Gala Dinner. Geoff Walker advised Bookman Beattie "I’ve been planning to go to Frankfurt anyway, so it’s been a simple matter to detour to London. Ditto Michael Heyward, his Australian publisher, but Michael Gifkins is making a special trip".
So is Bookman Beattie, and he's excited about it!
Posted by Beattie's Book Blog at 1:24 pm

awesome Bookman Beattie! Can't wait to read your blog from London. And go Lloyd Jones and Mr Pip! This book should go all the way, so all the best!
Lee