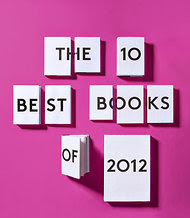 BRING UP THE BODIES
By Hilary Mantel.
A John Macrae Book/ Henry Holt & Company, US$28.
Taking up where her previous novel, “Wolf Hall,” left off, Mantel makes the seemingly worn-out story of Henry VIII and Anne Boleyn newly fascinating and suspenseful. Seen from the perspective of Henry’s chief minister, Thomas Cromwell, the ruthless maneuverings of the court move swiftly to the inevitable executions. Both this novel and its predecessor were awarded the Man Booker Prize. Might the trilogy’s forthcoming conclusion, in which Cromwell will meet his demise, score Mantel a hat trick?
BUILDING STORIES
By Chris Ware.
Pantheon Books, US$50.
Ware’s innovative graphic novel deepens and enriches the form by breaking it apart. Packaged in a large box like a board game, the project contains 14 “easily misplaced elements” — pamphlets, books, foldout pages — that together follow the residents of a Chicago triplex (and one anthropomorphized bee) through their ordinary lives. In doing so, it tackles universal themes including art, sex, family and existential loneliness in a way that’s simultaneously playful and profound.
A HOLOGRAM FOR THE KING
By Dave Eggers.
McSweeney’s Books, US$25.
In an empty city in Saudi Arabia, a ­middle-aged American businessman waits day after day to close the deal he hopes will redeem his forlorn life. Eggers, continuing the worldly outlook that informed his recent books “Zeitoun” and “What Is the What,” spins this spare story — a globalized “Death of a Salesman” — into a tightly controlled parable of America’s international standing and a riff on middle-class decline that approaches Beckett in its absurdist despair.
NW
By Zadie Smith.
The Penguin Press, US$26.95.
Smith’s piercing new novel, her first in seven years, traces the friendship of two women who grew up in a housing project in northwest London, their lives disrupted by fateful choices and the brutal efficiency of chance. The narrative edges forward in fragments, uncovering truths about identity and money and sex with incandescent language that, for all of its formal experimentation, is intimate and searingly direct.
THE YELLOW BIRDS
By Kevin Powers.
Little, Brown & Company, $24.99.
A veteran of the Iraq war, Powers places that conflict at the center of his impressionistic first novel, about the connected but diverging fates of two young soldiers and the trouble one of them has readjusting to life at home. Reflecting the chaos of war, the fractured narrative jumps around in time and location, but Powers anchors it with crystalline prose and a driving mystery: How did the narrator’s friend die?
More here.
Posted by Beattie's Book Blog at 8:12 pm