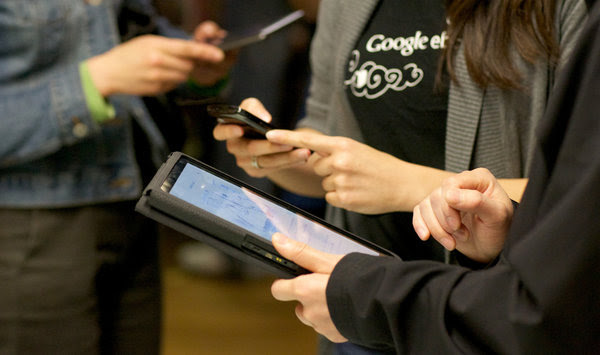 Thor Swift for The New York Times
A Google e-reader is displayed at a bookstore. Sales of e-books for the devices have slowed this year.

Last spring, the Justice Department sued five major publishers and Apple on e-book price-fixing charges. The case was a major victory for Amazon, and afterward there were widespread expectations — fueled by Amazon — that the price of e-books would plunge.

The most extreme outcome went like this: Digital versions of big books selling for $9.99 or less would give Amazon complete domination over the e-book market. As sales zoomed upward, even greater numbers of consumers would abandon physical books. The major publishers and traditional bookstores were contemplating a future that would pass them by.
But doomsday has not arrived, at least not yet. As four of the publishers have entered into settlements with regulators and revised the way they sell e-books, prices have selectively fallen but not as broadly or drastically as anticipated.
The $10 floor that publishers fought so hard to maintain for popular new novels is largely intact. Amazon, for instance, is selling Michael Connelly’s new mystery, “The Black Box,” for $12.74. New best sellers by David Baldacci and James Patterson cost just over $11.
One big reason for the lack of fireworks is that the triumph of e-books over their physical brethren is not happening quite as fast as forecast.
“The e-book market isn’t growing at the caffeinated level it was,” said Michael Norris, a Simba Information analyst who follows the publishing industry. “Even retailers like Amazon have to be wondering, how far can we go — or should we go — to make our prices lower than the other guys if it’s not helping us with market share?”
Adult e-book sales through August were up 34 percent from 2011, an impressive rate of growth if you forget that sales have doubled every year for the last four years. And there have been more recent signs of a market pausing for breath.
Full story at The New York Times
Posted by Beattie's Book Blog at 7:38 am