Libraries And E-Lending: The 'Wild West' Of Digital Licensing? 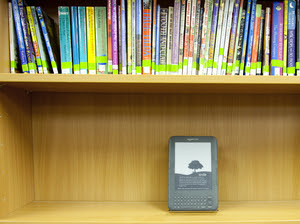 About three-quarters of public libraries offer digital lending, but finding a book you want can be frustrating — every publisher has its own set of rules.iStockphoto.com

Have you ever borrowed an e-book from a library? If the answer is no, you're a member of a large majority. A survey out Thursday from the Pew Internet Project finds that only 5 percent of "recent library users" have tried to borrow an e-book this year.
About three-quarters of public libraries offer e-books, according to the American Library Association, but finding the book you want to read can be a challenge — when it's available at all.

Brian Kenney is the director of the White Plains Public Library in New York. He tells NPR's Audie Cornish about a library patron who wanted to check out a digital copy of Walter Isaacson's biography of Steve Jobs.
"It was a middle-aged guy, you know, had a high techno-comfort zone, he was carrying his iPad, and he approached the desk carrying the Isaacson bio and said, 'How do I download this,' " Kenney recalls. "And it was the classic case where I had to explain to them, 'Well, sir, actually, you can't download that from here.' And then ensues the discussion why, as though somehow or other the library was stupid or failing in its job."
In fact, Kenney says, it's not a failure on the part of the library — Simon and Schuster, which published the book, would not license it to the library for download.

You might think about all this as the Wild West of digital licensing — a frontier environment where every publisher has its own set of rules. Among the six biggest companies, Simon and Schuster currently licenses none of its e-books to libraries. The company says it simply hasn't found a model that works.

Posted by Beattie's Book Blog at 6:20 am