A good crowd of 30 people packed into Alan Aldridge’s Kiwi Art House Gallery on Tuesday night, 4 December, to celebrate two new books by poet and publisher Mark Pirie.
Those in attendance included well-known poetry personalities like Vivienne Plumb, Lewis Scott and Michael O’Leary, Dr Bill Sutton of the Hawke’s Bay Live Poets Society, poet/publisher Helen Rickerby and librarians from the Turnbull and National Library of New Zealand.
Dr Niel Wright, Mark’s co-organiser with the Poetry Archive of New Zealand Aotearoa, launched both books.
After Niel’s speech, Mark read poems from each of the books.
Mark, commenting on why he edited the substantial volume of Robert J Pope’s work some 63 years after Pope’s death, told people of the similarities between of 70-100 years ago and the of 2012. “The poems prove that not much has changed in 100 years and Pope’s poems are just as relevant today as they were in the 1920s and 1930s, whether it is politics at Parliament, the cricket at the Basin or the latest All Blacks rugby match.”

In honour of the windy conditions outside, Mark read Pope’s poem ‘Windy Wellington’ written and published in The Evening Post in 1940:

It seemed to me of late (I fear I erred),
That , grown wise, was wearing down
Her one reproach, those blustering springs which gave
Detractors joy, and cause to dub her oft: “The windy town.”

In this, her hundredth year, has she relapsed,
Dispelling hopes that some amend was made?
Alas! a fore-time gale she late released,
The fickle jade!

Her lovely Gardens, then enjoying wealth
Of cherry, plum, magnolia, kowhai, gay,
She smote with ruthless, biting blast, and swept
That wealth away!

Mark read four poems from his Old Hat book, including the book’s title poem ‘Old Hat’, a tribute to Bob Dylan and a cricket poem ‘Old Bat’ for his young nephews. Old Hat, designed to be out of step with current poetry trends, reinterprets the old triolet French form. There is also a blues motif running through the book with a blues hat featured on the cover (drawn by Michael O’Leary). Mark commented: “The blues is about truth telling, and saying it like it is. The poems represent different attitudes of people and comment on diverse subjects.”

I have been asked to launch Mark’s new books, the latest he has written or edited. I am Niel Wright. I do so with pleasure because they are books that share two of my interests. There is a need to see things in a different light, in a different perspective as Mark does.

One is a large collection of poetry by a long forgotten NZ poet Robert J Pope whose poetry was in print from 1902 to the 1940’s. The book is KING WILLOW selected poems.
Pope lived 1865-1949. He was 12 years younger than the earliest born poet Mary E Richmond. She also lived to 1949. I shared the last 16 years of both their lives. So literally I grew up in their era with some degree of exposure to both.
Mark Pirie’s judgement on Robert J Pope is valid. Mark’s words are "Pope’s poetry, lyrically gifted, showed musical flair and easy felicity of rhyme." I would add Pope is intelligent, acute and witty. He reflects his time, but his insight is subtler than is obvious on the surface. He has a profound sense of what changed between 1880 and 1940.
The other is a book of Mark’s triolets, OLD HAT.
Triolets have been around since the 13th century and have been popular all over . There was a Frenchman the Duke of Orleans whose son became king of . When the Duke of Orleans was a prisoner of Henry V of he wrote triolets in English as well as French. The triolet was neglected otherwise in English till the late 19th century.
Mark’s triolets are like nothing that has previously been written in English. They are a vigorous development which I welcome as a fruitful line of work.
Mark Pirie says his book OLD HAT gives a set of dramatic monologues reflecting popular interests nowadays. But interestingly Mark Pirie sees Robert J Pope as doing similarly in much of his poetry in newspapers and weeklies. And I have to say all my poetry is also a dramatic enactment in which I present myself as author, persona and dramatic character interacting with other epic characters all of us running together to some point. 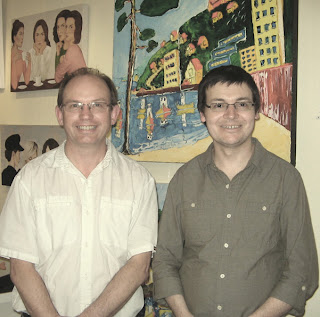