With Kindle, Can You Tell It’s Proust? 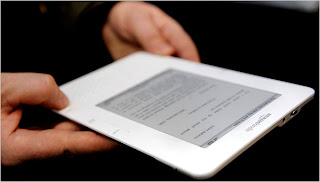 By JOANNE KAUFMAN
Published New York Times, April 24, 2009
SARA NELSON, the former editor of Publishers Weekly, was at a dinner party recently when Ed Rollins, the Republican campaign consultant, arrived carrying a Kindle.
“And I just said, ‘Can I see it?’ ” said Ms. Nelson, also the author of “So Many Books, So Little Time.” “In this honeymoon period of Kindle — when a lot of people don’t have them — you can look to see what someone is reading, in the guise of looking at the hardware.” (For the record, Mr. Rollins’s Kindle was crammed with the day’s newspapers.)
Ms. Nelson owns a Kindle and a Sony Reader. And for her, the ownership of an electronic book reader, while not necessarily a badge of literary honor, at least telegraphs a commitment to books.
“It’s really expensive,” she said of the Kindle 2, which Amazon sells for $359. “If you’re going to pay that, you’re giving a statement to the world that you like to read — and you’re probably not using it to read a mass market paperback.”
But to other writers and editors, the Kindle is the ultimate bad idea whose time has come. Anne Fadiman, the author, was relieved to learn that her essay collection, “Ex Libris,” was not available on Kindle. “It would really be ironic if it were,” she said of the book, which evokes her abiding passion for books as objects.
“There’s a little box on Amazon that reads ‘Tell the publisher I’d like to read this book on Kindle,’ ” she said. “I hope no one tells the publisher.”
The publishing world is all caught up in weighty questions about the Kindle and other such devices: Will they help or hurt book sales and authors’ advances? Cannibalize the industry? Galvanize it?
Please, they’re overlooking the really important concern: How will the Kindle affect literary snobbism? If you have 1,500 books on your Kindle — that’s how many it holds — does that make you any more or less of a bibliophile than if you have the same 1,500 books displayed on a shelf? (For the sake of argument, let’s assume that you’ve actually read a couple of them.)
The practice of judging people by the covers of their books is old and time-honored. And the Kindle, which looks kind of like a giant white calculator, is the technology equivalent of a plain brown wrapper. If people jettison their book collections or stop buying new volumes, it will grow increasingly hard to form snap opinions about them by wandering casually into their living rooms.
The full story at NYT online.
Posted by Beattie's Book Blog at 9:09 pm