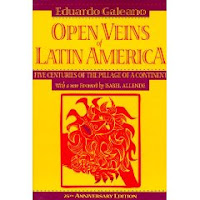 A book which the Venezuelan leader Hugo Chavez presented to US President Barack Obama at the Americas summit has become a bestseller in just two days.
The book, Open Veins of Latin America: Five Centuries of the Pillage of a Continent, was ranked 54,295 on the sales charts of bookseller Amazon.com.
Now, it has risen to number two.

Written by Uruguayan author Eduardo Galeano, the book looks at the impact of foreign intervention in Latin America in the past five centuries.
It covers the continent's conquest by the Spanish nearly 500 years ago right up to the present day.
President Chavez presented his American counterpart with the book, a favourite of leftists, on the sidelines of the Summit of the Americas in Trinidad on Saturday.
'Nice gesture'
President Obama looked surprised when Mr Chavez got up from his seat, handed him the book and then shook his hand.
It was a Spanish-language paperback copy inscribed with the message: "For Obama, with affection".
A little later, Mr Obama had this reaction: "Well I think it was a nice gesture to give me a book. I'm a reader."
However, for President Chavez it was a serious matter.
"This book is a monument in our Latin American history. It allows us to learn history, and we have to build on this history," the Venezuelan leader told reporters at the summit.
It is not the first time Mr Chavez's choice of reading matter has given authors a boost, the BBC's Greg Morsbach reports.
His speech at the United Nations three years ago helped to revive the fortunes of the American intellectual, Noam Chomsky.
Mr Chomsky's title, Hegemony or Survival: America's Quest for Global Dominance, became the number one bestseller on Amazon after a plug from Mr Chavez during his address.
Bookshops in the US and Europe sold out of copies within days. Tens of thousands more copies were ordered in from the publishers.
Posted by Beattie's Book Blog at 7:52 pm