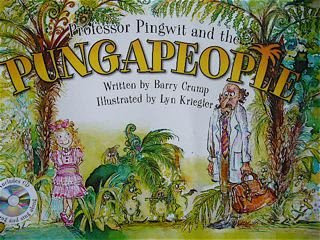 The latest installment in Barry Crump's much-loved series launches May 7, 2009 in Auckland at the Children's Bookshop in Ponsonby. The book's appearance is a direct result of a Writers In Schools visit by Lyn Kriegler to Grey Lynn School in early 2008.
Watching Lyn demonstrate to the class how to draw a dog , then turn a name into a story, one of the students went home to show her father what she had learned as a result of Lyn's visit.
Her father was Martin Crump, radio broadcaster , songwriter and son of the late author Barry Crump.

Martin had been looking for an illustrator for several of his father's unpublished manuscripts for children. A quick phone call to the principal of the school ensured that Lyn and Martin linked up; with the result of PROFESSOR PINGWIT making his nefarious appearance! During the course of the project, Martin came up with a Pungapeople song based on his father's writings; subsequently recorded it as a CD which accompanies the book, along with a "Read Along and Sing Along" wordsheet at the back of the book.
Lyn suggested that a page of the new book be devoted to the history of the Pungapeople. According to Barry's memoirs, he had been walking a West Coast track in Punakaikai, when he came across a tiny pair of children's shoes stuck in the mud and abandoned. 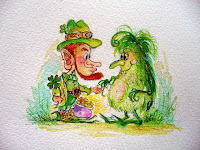 In Barry's imagination these became the lost footwear of the fabulous Pungapeople, New Zealand's answer to the leprechauns of Ireland. Hairy, green and very mean, invisible to the eye, full of mischief and trickery; the Pungapeople came alive in Barry's subsequent series
for children. His love for Maori legends of fairy folk, the Patupairehe, played a major role in his inspiration.
L 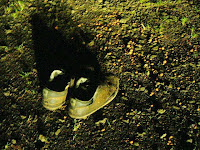 yn relates an eerie incident in her development of the artwork for the Pungapeople. "After Martin paid a visit to me out here at my studio at KareKare (also a traditional home of the Patupairehe, the fairy "children of the mist"), my husband and I decided to go for a drive down to the beach. There are a lot of track entrances on our road, and as we passed the entrance to the Huia Ridge Track, there were a pair of muddy children's shoes, prominently placed neatly at the entrance to he track. i got out and examined them; they were very muddy, and looked like they had been there a long time. I took a photo of them, seeing it a an odd coincidence, having just been discussing Barry's inspiration with Martin. When I developed the photo, it was green! I retrieved the shoes some weeks later, and now I tell the story(and show the photo) to schoolchildren, showing them the shoes when discussing 'Where do writers get their ideas from?' It always gets everyone's attention!"
PINGWIT is the fifth in the Pungapeople series; previous illustrators are Murray Ball, Donovan Bixley and Natalie Ward.
Posted by Beattie's Book Blog at 2:11 pm