With a seven day sale of 27,593 copies, Goody's diary outsold the book in second position in the hardback non-fiction charts, James Wong's Grow Your Own Drugs (HarperCollins), by six copies to one. 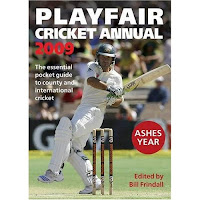 This week's highest new entry in the Official UK Top 50 is the latest edition of Bill Frindall's Playfair Cricket Annual. Now in its 62nd edition, the pocket guide to county and international cricket sold 9,414 copies through the market last week and joins the chart in 20th position.
In total, £26.5m was spent through Nielsen BookScan's Total Consumer Market during the seven days to 25th April, up 1.3% week-on-week and up 0.2% on last year—a week when Patricia Cornwell's Book of the Dead (Sphere) fell just 145 copies short of a 50,000 weekly sale.
Footnote: That is Ricky Ponting on the cover of the Playfair Cricket Annual.
Posted by Beattie's Book Blog at 10:33 am