Children's laureates choose their classics
28.04.09 Graeme Neill in The Bookseller

Just William, Stuart Little and Mary Poppins have beaten Harry Potter in being named the greatest children's books of all time.
The boy wizard was not chosen for the Laureates' Table, a new promotion at Waterstone's that is part of the 10th anniversary of the Children's Laureate. Children's laureates Quentin Blake, Anne Fine, Michael Morpurgo, Jacqueline Wilson and Michael Rosen each selected seven books but have favoured the classics over the modern era. Only five of the 35 books selected were published during the last 20 years.
Sarah Clarke, Waterstone’s children’s buying manager, said: "I’m sure it will be a surprise to many that the list does not include more recent bestsellers like J.K. Rowling’s Harry Potter. But it’s great to see the Laureates choosing some timeless greats like The Railway Children and Just So Stories and introducing them to a new generation of readers – that’s what the laureates are all about’."
The 1930s was seen as the classic decade for children's fiction, with seven titles, including Sword in the Stone by T.H. White, Ballet Shoes by Noel Streatfeild and P.L. Travers’s Mary Poppins making the cut. 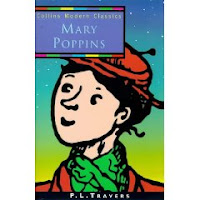 Jacqueline Wilson said of Mary Poppins: "I would love to be Mary Poppins, admired by everyone, totally in control, never turning a hair even when flying through the air with her carpet bag and parrot-headed umbrella."
The most popular authors with two picks each are E. Nesbit for Five Children and It (chosen by Blake) and The Railway Children (chosen by Wilson), and Robert Louis Stevenson for A Child’s Garden of Verses (chosen by Fine), and Treasure Island (chosen by Morpurgo).
Morpurgo said of Treasure Island: "This was the first proper book I read for myself. Jim Hawkins was the first character in a book I identified with totally. I was Jim Hawkins. I lived Treasure Island as I read it. And I loved it. Still do. Wish I’d written it!"
The Laureates' Table was inspired by Waterstone's Writer's Table, where authors such as Sebastian Faulks and Nick Hornby selected the titles that influenced their work.
The Laureates' Table will be on display at selected Waterstone's stores and at waterstones.com until June 3rd, with handwritten thoughts explaining the choices accompanying each book.
The full list of titles on The Laureates’ Table is as follows:
Chosen by Quentin Blake:
1. Little Tim and the Brave Sea Captain by Edward Ardizzone (published 1936)
2. Queenie the Bantam by Bob Graham (1997)
3. The Box of Delights by John Masefield (1935)
4. Rose Blanche by Ian McEwan and Roberto Innocenti (1985)
5. Five Children and It by E. Nesbit (1902)
6. Snow White by Josephine Poole (1991)
7. Stuart Little by E.B. White (1945)
Chosen by Anne Fine:
8. The Wolves of Willoughby Chase by Joan Aiken (1963)
9. Absolute Zero by Helen Cresswell (1978)
10. Just William by Richmal Crompton (1922)
11. Journey to the River Sea by Iva Ibbotson (2001)
12. Lavender’s Blue by Kathleen Lines (1954)
13. A Child’s Garden of Verses by Robert Louis Stevenson (1885)
14. Sword in the Stone by T.H. White (1938)
Chosen by Michael Morpurgo:
15. Five Go to Smuggler’s Top by Enid Blyton (1945)
16. Mike Mulligan and his Steam Shovel by Virginia Lee Burton (1939)
17. Oliver Twist by Charles Dickens (1838)
18. Just So Stories by Rudyard Kipling (1902)
19. A Book of Nonsense by Edward Lear (1846)
20. Treasure Island by Robert Louis Stevenson (1883)
21. The Happy Prince by Oscar Wilde (1888)
Chosen by Jacqueline Wilson:
22. Little Women by Louisa May Alcott (1868-9)
23. A Little Princess by Frances Hodgson Burnett (1905)
24. What Katy Did by Susan Coolidge (1872)
25. The Family From One End Street by Eve Garnett (1937)
26. The Railway Children by E. Nesbit (1906)
27. Ballet Shoes by Noel Streatfeild (1936)
28. Mary Poppins by P.L. Travers (1934)
Chosen by Michael Rosen:
29. Clown by Quentin Blake (1995)
30. The Diary of a Young Girl by Anne Frank (1947)
31. Emil and the Detectives by Erich Kästner (1928)
32. Not Now, Bernard by David McKee (1980)
33. Fairy Tales by Terry Jones (1981)
34. Mr Gum and the Dancing Bear by Andy Stanton (2008)
35. Daz 4 Zoe by Robert Swindells (1990)
Posted by Beattie's Book Blog at 11:49 am