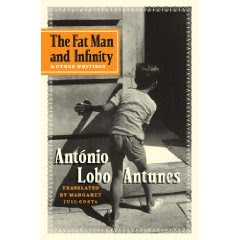 Doctor and Patient
A Portuguese novelist dissects his country.
by Peter Conrad , The New Yorker, May 4, 2009

Lobo Antunes trained as a doctor, and in the early nineteen-seventies, during military service, he was dispatched to Angola, near the end of a futile war in which the faltering Portuguese empire grappled to retain its African colony. In a makeshift infirmary, he lopped off limbs while a queasy quartermaster—disqualified from operating because the sight of blood made him sick—turned away and recited instructions from a textbook. Lobo Antunes also assisted a witch doctor who presided over births.
As he recalls in a new volume of essays and short stories, “The Fat Man and Infinity” (translated by Margaret Jull Costa; Norton; $26.95), he spent hours struggling “to pull living babies from half-dead mothers” and sometimes emerged into the daylight “holding in my hands a small tremulous life,” while mango trees rustled overhead and mandrills looked on. At such moments, he came “closest to what is commonly known as happiness.” The experience brought about a novelist’s epiphany. There was another way, Lobo Antunes saw, to fill the world with extra existences: characters could emerge fully formed from their creator’s brain, rather than making their blood-smeared escape from the womb.
With luck, a novelist can beget new lives, but he is also obliged to commemorate lives that cannot be saved. Back in Lisbon, after the war, Lobo Antunes worked at a hospital that treated children with cancer. The experience provoked a metaphysical rage; he found himself railing against a God who permitted such agony. He watched as a five-year-old boy with leukemia screamed for morphine. When the child died, two orderlies arrived with a stretcher, but the wasted body was so small that they chose to bundle it in a sheet. A foot slumped free of the shroud and dangled ineffectually in the air. Lobo Antunes decided, he said in a recent interview, “to write for that foot.”
Lobo Antunes published his first two novels in 1979. Since then, there have been twenty-one others, earning him a succession of European prizes. He is less well known to American readers, although nearly half of his novels have appeared in English—most recently “What Can I Do When Everything’s on Fire?” (translated by Gregory Rabassa; Norton; $19.95)—and Dalkey Archive has begun to publish earlier, previously untranslated Lobo Antunes works, starting with the 1980 novel “Knowledge of Hell” (translated by Clifford E. Landers; $13.95).
Internationally, Lobo Antunes is overshadowed by his older colleague José Saramago, who won the Nobel Prize in 1998. At home, the two writers, like rival political parties or sports teams, have noisy partisans, and those who cheer for Lobo Antunes claim that the wrong man won the Nobel. Lobo Antunes himself apparently agrees: when the Times called for a comment on Saramago’s victory he grumbled that the phone was out of order and abruptly hung up.
Read the full, entertaining piece by Peter Conrad at The New Yorker online.
Posted by Beattie's Book Blog at 1:21 pm