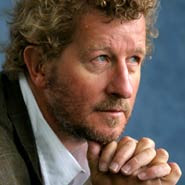 Page Turner:
Where are Amis, Greer, Faulks and Truss now, then?
by Katy Guest writing in The Indpendent on Sunday
Sunday, 26 April 2009

The first edition of The Independent on Sunday Review, on 28 January 1990, was a generous launching pad for keen young book reviewers. Alongside Anita Brookner and Germaine Greer the books pages carried an essay by Alan Bennett ("Anthony Powell's Books Do Furnish a Room was not my mother's way of thinking," he wrote. "'Books untidy a room' more like or, as she would have said, 'Books upset'") and a column by some chap called Sebastian Faulks. His first column for The Sunday Review was a literary ramble about driving a Sinclair C5 and was much like this one in tone, but with better hair. He left the paper not long afterwards to "concentrate on his writing". Nobody knows what has happened to him since.

The lead review was of The End of Nature by Bill McKibben, and was written by Martin Amis. He fitted in a bit of environmental outrage, then, in between publishing London Fields (1989) and Time's Arrow (1991). Amis's review says that the book "takes on a Promethean dimension when we look at biotechnology, or gene-splicing" and refers to contemporary readers' view of a distant future: "shaped by the set dressers of Blade Runner and Robocop". The future he means is 2010, about which McKibben had written: "It always shocks me when I realise that 2010 is now as close as 1970 – closer than the break-up of the Beatles." In 2010 Amis, the enfant terrible of British literature will be 60. And yet it is still considered groundbreaking to predict the end of nature; or The Vanishing Face of Gaia, as James Lovelock calls it in his latest book, published last month.
Subsequent editions of the books pages saw the rise and rise of a new writer and reviewer, whose copy was always immaculate with never an apostrophe out of place. This was before she, Lynne Truss, was a sports journalist, and long before she wrote the book that filled a thousand Christmas stockings: Eats, Shoots and Leaves. In the travel pages was a piece by Roger McGough.
When The Independent on Sunday was launched 19 years ago I was at school in Plymouth, not even dreaming that I would ever be part of it. Nonetheless, I hope that these pages will continue to have the balls of Germaine Greer, the eloquence of Amis, the accuracy of Truss, the accent of McGough and the lustrous hair of Sebastian Faulks; and not a less fortunate combination of these.
Posted by Beattie's Book Blog at 7:10 pm