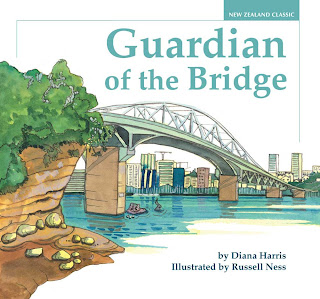 Guardian of the Bridge

In celebration of the 50th anniversary of the opening of the Auckland Harbour Bridge, the classic children’s picture book, Guardian of the Bridge, has been re-released by Random House New Zealand.

Originally published by Scholastic in 1990, Guardian of the Bridge tells the story of a taniwha who was the guardian, or kaitiaki, of a very deep lake. After a very long sleep, he awakens to find himself in a very different land: the forest has gone and a strange, hard surface covers the earth in a long strip. Along this travels some of the most terrifying taniwha he has ever seen.

Eventually the taniwha comes to make his home beside the first support of the Auckland Harbour Bridge, where he remains to this day, waiting for children to call “Tënä koe, taniwha!” as they pass.

If the children listen very carefully, they may hear him reply, “Tënä koutou, tamariki mä.”

The story of Guardian of the Bridge remains as timeless today as it did in 1990. This new edition contains six extra pages of facts, figures and images of the Auckland Harbour Bridge, and a brief history of the area.

About the Author and Illustrator
Guardian of the Bridge was the first book writer Diana Harris and illustrator Russell Ness worked on together.
Diana is a North Shore writer who has written several books, including Litterbugs, a children’s story in verse, and Johnny Jones: a Colonial Saga, a historical biography.

Russell is a management consultant, who was formerly an art teacher and artistic director. His life long passion for art and design is commonly expressed through his favourite medium of watercolour painting.
Footnote:
Back on 8 May 1989, a tad short of 20 years ago (!), I signed the publishing agreement for the orginal version of this wonderful story when I was CEO/Publisher at Scholastic and I must say I am truly chuffed to see it back in print. My warm greetings to Diana and Russell, I hope they and their publishers enjoy great success with this new expanded edition. It deserves nothing less.
Posted by Beattie's Book Blog at 2:04 pm