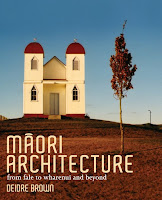 A landmark achievement in New Zealand history, Māori Architecture charts, for the first time, the genesis and form of indigenous buildings in Aotearoa New Zealand. It explores the vast array of Māori-designed structures and spaces — how they evolved over time, and how they tell the story of an every-changing people.

The book looks at facets of early Polynesian settlement, the influence of Christian and Western technology, the buildings of religio-political movements such as Ringatū, Parihaka and Ratana, post-war urban migration, and contemporary architecture.
Pic right - Whare Maori constructed at ratana Pa in early 1020's. Private Collection.

Deidre Brown’s absorbing, informed and sometimes controversial text is lavishly illustrated with over 130 photographs and artworks — all providing a long-overdue and fascinating survey of an important aspect of New Zealand culture and history.