Angelina Jolie, Fox 2000 and author Patricia Cornwell are teaming up for a killer deal.
The studio is acquiring screen rights to Cornwell's bestselling book series on medical examiner Dr. Kay Scarpetta, to develop as a vehicle for Jolie.
Mark Gordon will produce with Media Talent Group's Geyer Kosinski. The studio, producers and Jolie are meeting with writers and will set one shortly. Bryan Zuriff will serve as exec producer.
There are 16 Scarpetta novels, meaning a franchise is hoped for, but this film won't be tied to a specific Cornwell mystery title. Much the way that Jason Bourne morphed into an action hero in plots not rigidly locked into the Robert Ludlum book series, the opera-loving coroner Scarpetta will be the lead in a suspense thriller in the vein of "The Silence of the Lambs" and "Seven." 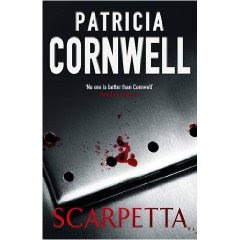 Deal is a mega-marriage, with Jolie one of the most bankable female movie stars, and Cornwell one of the biggest selling female authors in the world. Cornwell, whose latest installment "Scarpetta" was published last December by Putnam, last year made a deal with Lifetime Television to adapt two non-Scarpetta novels, "At Risk" and "The Front."
Gordon brought the property to the actress and her manager, Kosinski, after he chased rights that Columbia Pictures let lapse. Col had made a multimillion-dollar deal for Scarpetta rights in 1992, but gave up after several attempts to develop a pic.
Once Jolie sparked to the series, months of negotiations followed between ICM and Fox 2000's Elizabeth Gabler and Carla Hacken, because Cornwell was so protective of her literary property. The deal finally came together after Jolie and Kosinski met with the author and found common ground on the creative direction of the feature adaptation.
Posted by Beattie's Book Blog at 10:36 am

You know, I just can't imagine her in this role! I can't think off hand of an alternative, but Jolie doesn't fit my bill.