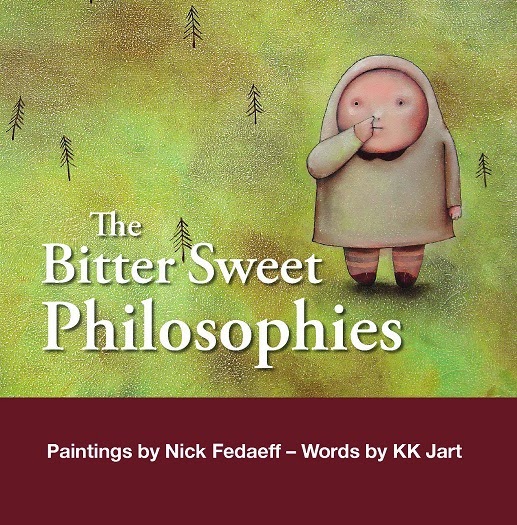 Available as a limited print edition in hardback and (in a choice of covers) paperback, on Kindle, and through online retailers (RRP varies)

People interpret paintings in various ways. But, ask a group of writers to respond, and you enter strange and unexpected worlds.

The Bitter Sweet Philosophies is an art book with a difference; a playful reinvention of the genre in which a collective of writers known as KK Jart engage with the surrealist vision of internationally-acclaimed artist, Nick Fedaeff.

The paintings featured in The Bitter Sweet Philosophies, in which readers get to choose between two cover variations (featured above), are an exploration of life through a child’s eyes. Each painting has, Fedaeff says, “a real life behind it” and is inspired by a childhood memory. The pictures depict the universal emotions of joy, curiosity and fear, which speak to adults and children alike.

Appraising each painting in the collection – there are 55 in total – with daring and imagination, the writers illuminate, satirise, amuse and often, they surprise and unsettle. They conjure up ancient wisdoms, fairy stories, personal philosophies/meditations, accepted truths. A picture is worth a thousand words, but each painting by Nick Fedaeff contains a thousand stories.

“I’ve done my part. My pictures are very obvious. But then you have different takes on each one. The writers have their own independent vision and points of view. It has been a very unusual experience.” – Nick Fedaeff

Frequently described as a soft-surrealist, Nick Fedaeff acknowledges the influence of Da Vinci, Dali, Bosch and Picasso. Inspired by dreams and reality, he adds humour as a tool of engagement.

Based in New Zealand, Eunoia Publishing is an international company dedicated to publishing quality writing, and assisting authors to get published. Established in 2010 by a collective of award-winning writers, editors, journalists and educators, including Judith White, their belief is that good books should be a work of art in every way.

Originally from Russia, Nick Fedaeff now resides in New Zealand. An accomplished artist, musician and composer, his paintings have been exhibited in collections around the world, including New Zealand, Australia, Europe and Japan. Fedaeff has been painting since childhood, and uses a combination of acrylics, oils and mixed media to create his work. For more information about Nick Fedaeff, go to: http://www.nickfed.com/. 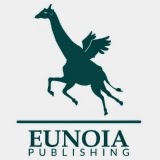 I went to the launching of this book. I got the distinct feeling I was not only seeing the birth of a new book, but also the birth of a new publisher and also the true birth of a whole NEW WORLD of publishing in NZ and perhaps even the world, though I suppose, just because I don't know of publishers this progressive overseas, doesn't meant there aren't any.