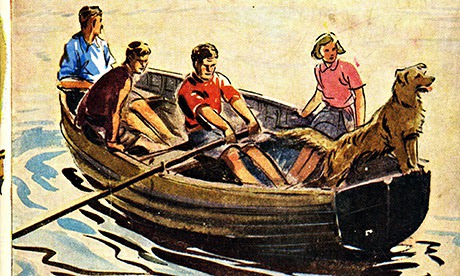 Famous Five on the cover of Five on a Treasure Island (1942). Photograph: Alamy

Their adventures fighting smugglers, thieves and evil scientists, fuelled on a diet of potted meat sandwiches and lashings of ginger beer, have captivated children for over 70 years.
Now Enid Blyton's beloved Famous Five series is to be made into a film after UK production company Working Title acquired the theatrical rights to the books.

The production company confirmed it had recently snapped up the rights to the whole library of the children's series, spanning more than 20 books, and intends to launch a live action franchise based on the quaint adventures of Julian, Dick, Anne, George and Timmy the dog.
More
Posted by Beattie's Book Blog at 8:28 pm