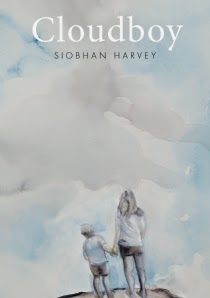 The way a cloud forms, so the poems of Cloudboy – quiet, controlled, in various shapes and sizes – build inexorably to something larger than themselves, something unexpected and absorbing. A collection of poetry aims to do that, of course, but some collections are narratives, one poem leaning on the others until the story’s out, and Cloudboy, which won the 2013 Kathleen Grattan Award for Poetry, is one of those.

Auckland poet Anne Kennedy’s books are like that, and I think of her particularly because in 2004 she published the stunning Sing-Song where the third person ‘eczema-mother’ (herself) charts life with a child suffering from eczema. Siobhan Harvey’s collection does the same with a cloudmother whose child is diagnosed with something more nebulous, more cloudlike, really: ‘special needs, Asperger’s, autistic, gifted.’ And the reading of these 46 poems about life with someone regarded as ‘strange’ by children, and disruptive and difficult by teachers, but who is simply different and actually rather extraordinary, drew me in to the point that I found myself crying.

The power of this collection builds slowly. The clouds are introduced as a metaphor for the boy himself, and for his moods and challenges as he struggles to live on the ground like everyone else.  They are a metaphor for his mother’s challenges, too, and for the mother-child relationship as the boy grows. The reader is taken from Cumulus with ‘such softness, halation and omniscience’ to the dark desire of Arcus. Clouds come to fascinate the boy as a subject of scientific study, as well as being a place of freedom and imagination. He just has to lift his head and off he goes – the rules up there being simpler for him to grasp than the rules of classroom or playground: ‘reaching out towards faint cirrostrati refracted/ into halo phenomena is easier than making a friend’.

Clouds in every poem? The warp of sadness, the weft of anger … I did wonder at the beginning if I could stay the distance … and whether the collection could sustain it. Could it be indulgent? Would sentimentalism creep in? I worried. I read.

And the character of Cloudboy snuck up on me. With him came his abiding curiosity for how things work, his passion for finding out, his genius for understanding (his subjects: Nephology, Astronomy, Ornithology and goodness knows what else at the age many are learning to write their names) and his perceptive mother. And we see this wisp of a boy go to school, and watch aghast at the way school tries to make him more boy than cloud, and in so doing breaks the heart they don’t seem to know is there (‘such softness’). No sentimentality or indulgence in these poems. Here’s the start of one: ‘Alienation’.

is the march of students into class,
the closing of space around them
like a retracted wing.

is ornithology for beginners:
Today’s lesson is birds, the teacher says;
and how the children squawk.

is uncertainty:
What birds do we know? the teacher says;
and how words and ideas flock
hungrily into Cloudboy’s mind.

is eagerness to impress:
Geese, Miss, cries Cloudboy;
and how he goes on, In Historia Animalium, Aristotle said
Barnacle Geese emerged from shellfish like phoenixes
from fires.

is the mouth of a river:
No, New Zealand birds! the teacher remonstrates:
and the liquid bubbling cry of it.
the call of a bittern, the cry of a tern …

Powerful stuff. Here is a story of a cloudboy and his cloudmother written in supple poems that push and pull language and form so the reader can see into the difficulties and strangenesses and, in some part, understand. For here is a story of what is normal and what is apparently not, of the way our society regards those who are socially and intellectually different … of perspective, really. How do we stand up to the clouds gazing upon us? It is also the universal story of a child’s potential and the power of the mother-child relationship. The grief. The belief. The sheer fighting love. Read it.

Mary McCallum is the director of Wellington publishers Mākaro Press which has launched a new poetry series, HOOPLA. She is also a poet and author herself with her latest book a novel for children: Dappled Annie and the Tigrish (Gecko 2014), and she teaches creative writing at Massey University.
Posted by Beattie's Book Blog at 6:24 am

This review is more poetry than prose. Loved every word of it. Thanks, Mary McCallum, for sharig your thoughts and experience reading Cloudboy